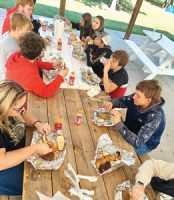 Students are pictured relaxing in the shelter they created during Mrs. Tamara Walls’ outdoor survival class at Triad Middle School. Walls said she was impressed by the students’ ingenuity in their decision to use pieces of tree bark to line the ground and create a better insulated space.

Triad Middle School students are pictured enjoying a foil pack meal they cooked over the fire during a last-day-of-class celebration at Camp Shiffer in Champaign County. Outdoor Survival Class Teacher Mrs. Tamara Walls said one student told her that the meal of hamburger, potatoes, carrots, cabbage and garlic bread was the best meal he’d ever had.

Instead of pencils and notebooks, a group of Triad Middle School students spent one of their fall class periods equipped with matches and walking sticks.

They ventured outside the classroom for a new elective course taught by Mrs. Tamara Walls: outdoor survival.

“When you take kids off campus, they become different kids,” Walls said.

The class is part of a batch of new elective courses being offered at Triad Middle School on top of typical options like art, music or physical education. Students now have choices ranging from an everyday life skills course to “hail to the chief,” a class about the history of presidents.

While Walls said she wasn’t initially sure how many students would be interested in the class, she was hopeful some shared her love of nature.

“It might sound a little selfish at first, but I love it outside,” she said of her suggestion to teach the class.

Walls said she also feels passionately that developing a connection with nature is “an important piece of children’s development that is often overlooked.”

Ultimately, she was joined by a class of 10 students, including nine eighth graders and one seventh grader.

They ranged from a few who had some prior experience spending time outdoors to others who never spent substantial time outside but were interested in doing so.

Walls said she was hopeful that the class would be a change of pace from the “stagnant activities” and screen time that many students are immersed in.

Especially following the COVID-19 pandemic, Walls said she wanted to give students time to “process and relax.” She said she believes breathing in fresh air and finding time to be creative can help improve children’s mental health.

Between one 45-minute class period each day for nine weeks, the students had plenty of opportunities to be creative.

Their first task involved a “challenge” to build a fire using only one match.

Walls said the students surpassed their goal that 80% of them would be able to meet the challenge within four weeks.

Each student also sanded their own hiking stick and created a handle made of paracord, which can be used in a variety of emergency situations.

Walls said she was especially pleased following a challenge for pairs of students to use a tarp to create their own shelters outdoors.

She said one group found sheets of tree bark and used it to line the floor of their shelter so it would be better insulated.

A few of the students even asked her if they could stay outside longer to “hang out” in their shelters, Walls said.

The veteran teacher said she found herself refreshed by the students’ excitement and engagement throughout the nine-week class.

She said she “wasn’t sure” about the middle schoolers’ ability to work as a team in challenging or unfamiliar situations, but she was repeatedly impressed by their willingness to collaborate.

Walls said she was also heartened by how often students told her that they were going to use their new skills outside of school.

Each Monday, the class shared with each other about what they did that weekend.

Walls said the number of outdoor activities seemed to grow over the quarter, even if it just included going on a walk with their family.

“That really struck a chord with me,” she said.

Aside from the actual skills they learned, Walls said she was grateful that the class created an environment in which students could connect with each other, and her.

One student Walls has taught in other classes often shares with her that he doesn’t necessarily like school or feel like he is good at it.

After he arrived to school late one day, Walls said he told her, “Well, I woke up and thought, I have to go to school, I can’t miss outdoor survival class.’”

Walls said the middle schoolers were genuinely interested in much of the subject matter and showed pride in their accomplishments.

After cooking a foil-pack meal filled with hamburger, cabbage, carrots and potatoes over the fire walls said one student told her, “I give this meal a 10 out of 10!”

She said she also enjoyed seeing the students become more and more confident in their abilities, even if she sometimes found herself chuckling at just how confident they were.

“It’s funny how they say, ‘I could survive that, no problem!'” after watching survival TV shows, Walls said with a laugh.

She said she feels the outdoor survival class is a great example of how elective courses can benefit students and teachers alike by letting them get involved with useful topics they are passionate about.

Walls said she enjoyed seeing her students think outside of the box and learn new things, but, more than anything, she said it was great to see her class just have fun at school.