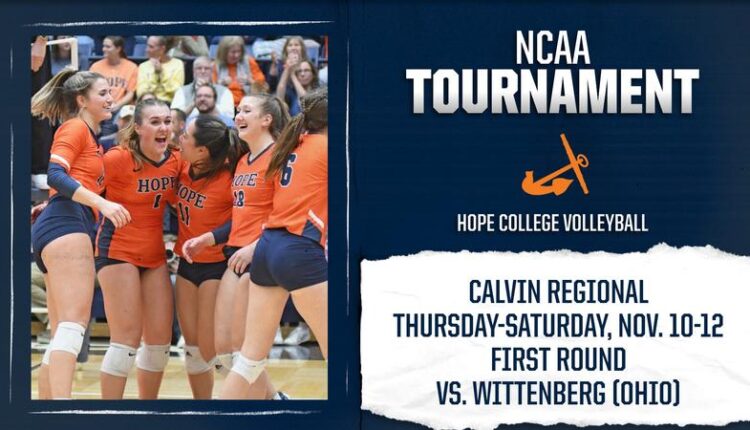 The Hope College volleyball team will open the NCAA Division III Tournament against a familiar foe.

After receiving an at-large berth, the Flying Dutch will face Wittenberg University (Ohio) in the quarterfinals of the Grand Rapids, Michigan Regional hosted by Calvin University on Thursday, Nov. 10, at 12:30 pm

Hope (21-7) and Wittenberg (23-4) are meeting for the second time this season and the fifth time in the NCAA Tournament. Wittenberg has won four of the postseason meetings. The Flying Dutch’s victory came during the 2014 national championship run with a five-set victory in the regional final.

This is Hope’s 18th trip to the NCAA Tournament. The Flying Dutch have reached the regional final in their past two appearances, losing to eventual national champion Wisconsin-Eau Claire in 2021.

The regional semifinal winner will play on Saturday, Nov. 12, at 5 pm for a spot in the national quarterfinals.

Tickets can be purchased at the door. Ticket prices are $6 for general admission, $4 for senior citizens, members of the military and students and $3 for children ages three-to-12. Children under three are admitted free.

All-session passes, which are good for all three days, are $12 for adults, $10 for seniors citizens, members of the military and students and $7 for children ages three-to-12.

7 Of The Most Charming Small Towns In Illinois