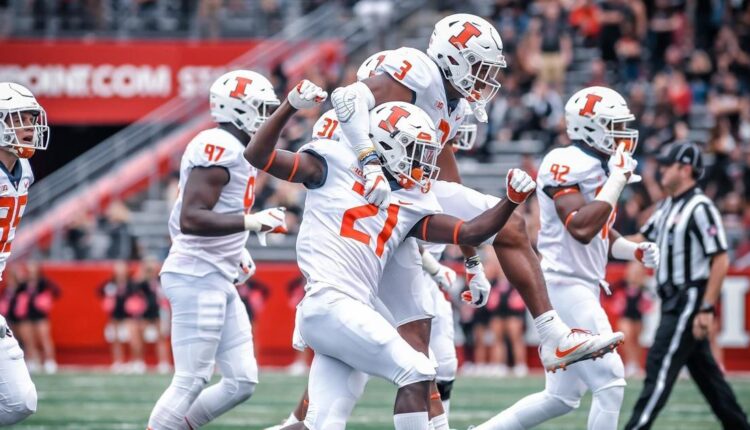 Before becoming a starting defensive back for the Illini, Martin was a two-way guard who participated in dunk contests, with a windmill in the contest at the City of Palms Classic in 2016.

“I was like, ‘Holy Toledo.’ His explosiveness and ability to jump out of the gym … Quan is very unique,” ​​Bielema said.

That athleticism paired with finding a home at slot corner last season, have made him one of the top players on the defense. He was the unit’s top performer in the Illini’s Week 0 win over Wyoming and was named the national defensive player of the week by the Bednarik Award, the award given annually to the country’s top defensive player.

“I’ve been trying to tell you guys since the spring that he can do it all,” defensive coordinator Ryan Walters said. “You got the chance to see him play in a high safety role there for a while and you could see the versatility he brings. He was awesome in coverage. He’s just getting more and more comfortable in Year 2 in the system. He’s got to continue to play like that for us to have the type of year we’re capable of having moving forward.”

Martin was one of the talking points from the staff in camp. Bielema described him as one of the players he was most excited with seeing this season. Walters shared that sentiment, especially after Martin excelled in the slot corner role at the end of last season.


“That job is hard,” Walters said. “For him to be able to cover the way he did against some of the better opponents we saw last year towards the end of the season, that’s what made me excited. Obviously with Kerby’s departure and now being able to play him some as a high safety when they get in larger personnel groupings, you can kind of see his versatility as a tackle and a ball tracker from the middle of the field. He’s got corner coverage ability, but he’s got safety range and physicality.”

With the loss of Joseph, an All-Big Ten player, Martin’s next step is to showcase that versatility in different kinds of packages and roles.

“Spring is kind of the time to go out and make plays and know your ability and see what you can and can’t do,” Martin said. “Just playing through spring ball and making plays just gave me that confidence. I built that up through fall camp and it showed in the first game.”

Martin has bounced around the field at different positions in the secondary throughout his career at Illinois, now that time is paying off with a versatile skill set to do different things. Walters has called him the quarterback of the defense while he’s also displayed man coverage ability as a corner.

“I just visited with NFL scouts earlier today and everybody wants to know what position you project him at,” Bielema said. “I think after being in the NFL I can see Quan being evaluated at four different positions: STAR, boundary and field safety and both corner spots. I really think he brings a unique skill set that isn’t very common.”

For Martin, he’s not concerned about where he plays or what that role is.