What Illinois offensive coordinator Barry Lunney Jr. said during the the open week 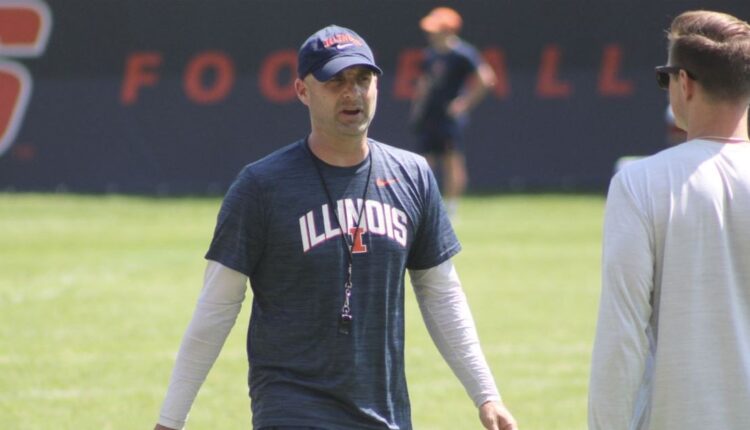 CHAMPAIGN — Illinois once again showed flashes of being able to move the ball in a convincing win over Virginia, but mistakes on offense kept the Illini from being able to have a truly blowout win.

Through three games the Illini have moved the ball fairly well but turnovers, penalties, mental mistakes or red zone shortcomings have kept the offense in check in offensive coordinator Barry Lunney Jr.’s first season at Illinois.

Illinois (2-1, 0-1 Big Ten) totaled almost 400 yards of offense yet just mustered 17 points on its own. The Illini turned it over four times for a second straight week, missed two field goal attempts for the second time in three games and came up empty on two of its four red-zone opportunities. Fortunately for the Illini, the defense put together a masterpiece of a performance to avoid the fate of last week’s devastating 23-20 loss at Indiana.

Those offensive inconsistencies will be addressed during the team’s open week.

Here’s what Lunney said via Zoom on Tuesday during the team’s open week.

Are there any similarities between the ball security issues? How are you trying to address that?

Lunney: “It’s been a little bit of everything. In the game the other day we started the second play of the game with an interception, so there’s ball security. We also got hit with the ball and gave up a sack fumble, then fumbled in the normal flow of the game from a running back perspective and fumbled at the receiver position going in. All four of those are uniquely different but they’re all the same in the fact that 1) we just can’t have it and 2) how detrimental it is to being productive on offense. They have some commonalities but each scenario was kind of different and unique and I would say that’s kind of also the same thing that happened the week before. They’ve all kind of had unique scenarios. Whatever the scenario is and has been, that’s obviously something we’re going to work tirelessly on to address and get fixed because that’s something we just can’t have moving forward.”

Volunteers host weekend walk to raise money for the poor