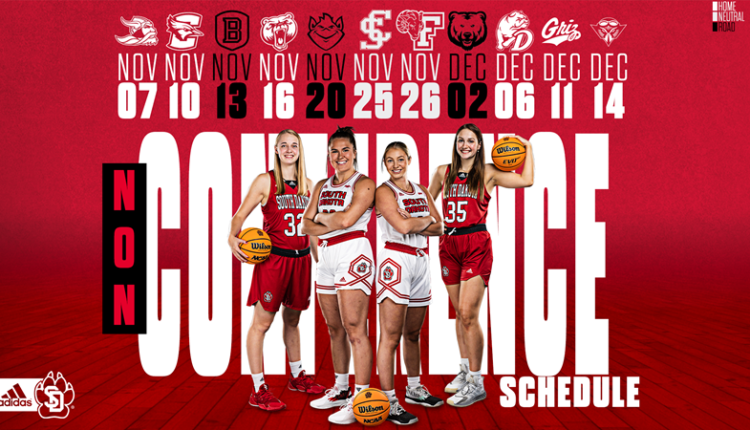 The Karius era officially opens on Monday, Nov. 7, with a home game inside the Sanford Coyote Sports Center versus Midland.

It was a pair of Midwestern 10-seeds making waves during March Madness. This November, returners from South Dakota’s Sweet 16 squad will face returners from Creighton’s Elite Eight team in a rematch on Nov. 10. The Coyotes lead the series 14-12 following last year’s thrilling 73-71 win in Omaha.

Other featured teams visiting Vermillion include the Missouri Valley’s Drake, the Big Sky’s Montana and the Ohio Valley’s UT Martin.

Another regional rival, Drake, comes to town on Dec. 6 for the 13th meeting in program history. The Coyotes’ evened the record to 6-6 with a 61-46 victory at Des Moines, Iowa, last season.

Montana makes its second trip to Vermillion in four seasons with a game on Dec. 11. USD won the previous home-and-home series with the Griz in 2018 and 2019.

UT Martin is a new opponent in South Dakota’s history, with the Skyhawks visiting Vermillion on Dec. 14

Rounding out the nonconference schedule are three nonconference road trips to fellow mid-majors. South Dakota takes on Bradley for the third-straight season, meeting in Peoria, Illinois, on Nov. 13. The Coyotes visit Saint Louis in Missouri on Nov. 20 for the first meeting between the programs. South Dakota will also face former NCC foe Northern Colorado on Dec. 2 in Greeley, Colorado. The Coyotes lead the all-time series with the Bears 19-14.

The Summit League slate begins Dec. 19 with a home game versus Kansas City. Rivalry matchups with South Dakota State are slated for Jan. 14 at Brookings and Feb. 11 at Vermillion. Senior day is scheduled for Feb. 18 versus Denver, while the regular season will conclude Feb. 25 at Kansas City. The Summit League Tournament returns to the Denny Sanford PREMIER Center March 4-7 in Sioux Falls, South Dakota.

Arrest records from the September 14, 2022 edition of the Calhoun Times | Local