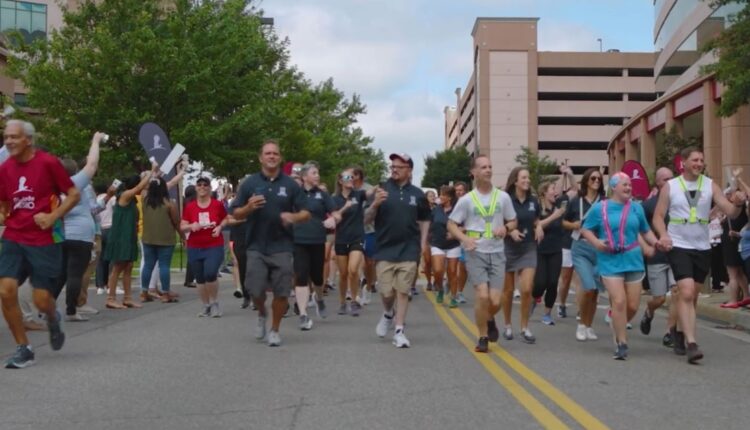 The 465-mile relay-style run continues day and night, rain and shine, until runners reach their destination on August 6th.

The 465-mile relay-style run continues day and night, rain and shine, until runners reach their destination on August 6th. When runners make it to Peoria, the city holds a parade and kicks off the St. Jude Telethon.

Since its start in 1982, the run has raised more than $71 million for the hospital.

Among those taking part are an Illinois family with three runners over two generations, who have been taking part for 39 years.

St. Jude said Charlie Gibbons, now 68, befriended the co-founder of the run in 1982 and joined in. His son Ryan, who was 5 when his dad began, signed on when he turned 18, followed by his younger brother Matt three years later.

The Gibbons family’s goal is to raise $50,000 as a team by the time they cross the finish line.

Also taking part are several St. Jude patients and their families. St. Jude said 2022 marks Kevin Pautler’s 30th year, and his daughter Jeri’s 15th. They run in memory of Kevin’s son and Jeri’s brother Dusty, who was treated for ALL (acute lymphoblastic leukemia) at St. Jude twice, but passed away in 1991 at the age of 12.

Jeri’s husband also runs the St. Louis to Peoria Run with his brother, who is also a former St. Jude patient.

Memphis >> Peoria! The St. Jude Memphis to Peoria runners are off! Wish them luck as they make their way on foot to Peoria, all while raising funds #forStJude!! #RunningForGood 🏃‍♀️🏃‍♂️ pic.twitter.com/0hG4X983q8

RELATED: After 12 years post cancer treatment, one cancer survivor can now give back