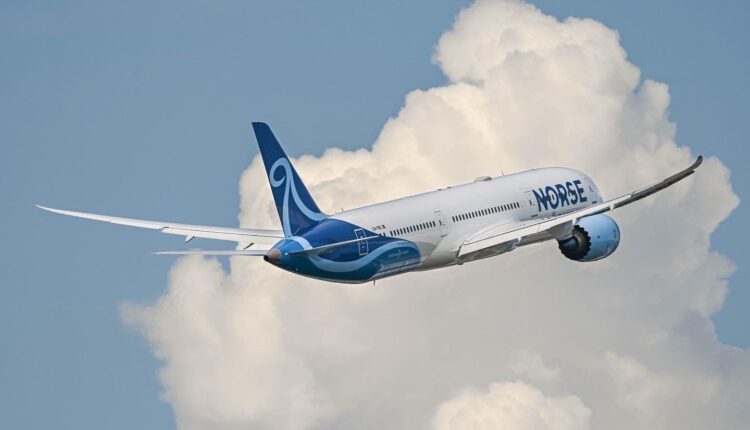 Norse Atlantic has applied to the US to begin routes using its soon-to-be-approved Norse Atlantic UK air operator’s certificate (AOC). In its application, it disclosed more details about its plan. For now, it expects seven routes from London Gatwick (or six if you cut JFK, which will begin in August temporarily using its original AOC on a fifth-freedom basis) and eight B787-9s.

It comes a few days after its first two routes, from Oslo to JFK and Fort Lauderdale, took off. It has announced its initial Gatwick routes along with two routes from Berlin. And it has also recently obtained slots for service from Dublin and Dubai.

SIMPLE FLYING VIDEO OF THE DAY

The following summarizes Norse Atlantic UK’s filing with the US Department of Transportation. The new British airline plans JFK, Fort Lauderdale, Orlando, Los Angeles, San Francisco, Chicago (Rockford), and Washington (Baltimore), the latter the first US destination of Iceland carrier PLAY. But, things can – and often do – change.

stay aware: Sign up for my weekly new routes newsletter.

Norse Atlantic’s application for mainland Europe service to the US specified Stewart for Greater New York City and Ontario for Greater Los Angeles. It has done the same in its filing for its UK AOC. However, neither Stewart nor Ontario materialized, with JFK and Los Angeles chosen instead.

As the airline’s founder and CEO, Bjørn Tore Larsen, said recently, “for now, we’re sticking with JFK and Los Angeles.” As reiterated in the filing, he said that this is supposedly because of the inability of Stewart and Ontario to handle sufficient quantities of international freight.

It decided against the airports because freight sales are apparently much more significant than expected. Serving JFK/Los Angeles will also mean much higher passenger yields and awareness, although offset by significantly higher charges and congestion.

Notice Chicago Rockford and Baltimore. It is the first time it has publicly mentioned the airports. Rockford, located over 80 miles (1299km) from the Chicago Loop, is more of a domestic freight airport than it is for passengers, just like Ontario, but Korean Air operates cargo services from Seoul. Only Allegiant serves Rockford on a scheduled passenger basis, but Frontier had international services until spring 2015.

Unlike New York and Los Angeles, it didn’t clarify service to Rockford in its DOT submission, which suggests it may indeed intend to launch it. However, it didn’t specify New York/Los Angeles airports in its original application last year, so we can’t really read anything into it. Rockford would be peculiar, especially given its location and that it is unknown to non-Americans, but financial incentives would be significant. If Chicago materializes, I’d bet on O’Hare.

Why serve Rockford for Chicago and not Oakland for San Francisco? Oakland had a long history with Norwegian: the forerunner to Norse Atlantic served the airport from Gatwick between May 2016 and March 2019, but it shifted to San Francisco. It also switched from Fort Lauderdale to Miami, which was before Miami lowered its fees and charges, leading to an explosion in budget airlines. BA’s entry into Gatwick-Oakland/Fort Lauderdale, designed purely to compete with Norwegian, undoubtedly influenced things.

What do you make of what Norse Atlantic filed? Let us know in the comments.

Seniors With Prediabetes Should Eat Better, Get Moving, but Not Fret Too Much About Diabetes