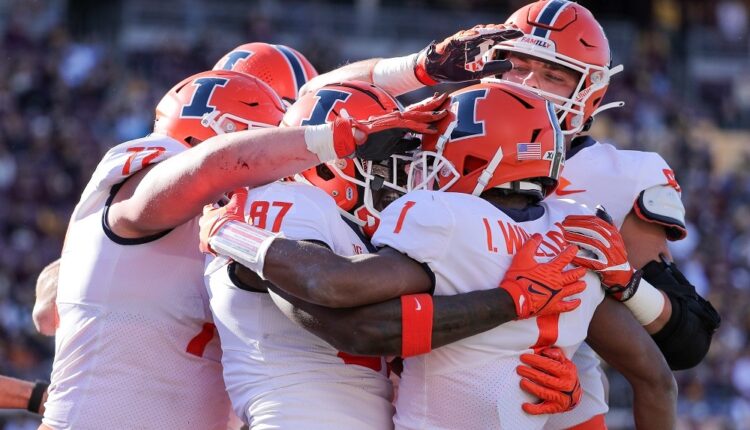 The Cowboys will open the 2022 season in Big Ten country against a very Wyoming-like Illinois team.

The Wyoming Cowboys will kick off their 2022 season by heading east for a date with the Illinois Fighting Illini. For those fans who tune in this August, it’s likely they’ll see two teams trying to accomplish the same thing.

That’s because the Illini, like the Cowboys, prefer to run the ball and play stout defense. And hey, it’s worked for other teams in the Big Ten West, specifically, so it may be that this matchup makes for a unique chess match on the Week 0 docket.

Series History: This will be the first meeting between Illinois and Wyoming.

Head Coach: Bret Bielema (second year at Illinois; 5-7 with Illinois, 102-65 overall). After a very successful stint at Wisconsin and a mostly successful one at Arkansas, Bielema’s first year back in Big Ten country was an interesting one. The Illini didn’t make a bowl in 2021, but they did have an insane nine-overtime win over a ranked Penn State and their biggest romp over in-state rival Northwestern since 1989.

They also played more close games overall than you might have realized, too, finishing 3-4 in contests decided by eight or fewer points. Bielema’s Illini may not offer many frills, but they’ll be more than happy to fight in a phone booth much like Wyoming.

Randolph only started seven games as a redshirt freshman last fall, but he demonstrated plenty of potential to be a problem on the interior. He finished the season with 42 tackles, 5.5 tackles for loss and four sacks and, at 6-foot-5 and 300 pounds, could be a serious matchup problem for the retooling Cowboys.

Witherspoon made three starts as a true freshman back in 2019 and then made seven more in the abbreviated 2020 COVID season, but 2021 was easily his best overall campaign. He led the Illini with nine passes defended but also solidified himself as a rugged run stopper with 52 total tackles and eight tackles for loss, as well.

The Illini weren’t known for chucking the ball all around the field, but Williams himself had a very good year considering the circumstances. According to The Athletic’s Jesse Temple, his 47 catches were the third-most among all Power 5 freshman pass catchers, going for 525 yards and four touchdowns altogether. At 5-foot-10 and 180 pounds, Williams could thrive inside or outside in the team’s retooled offense.

Last season, Brown was the primary beneficiary of what has usually been Bielema’s offensive ethos: Pound the rock, then pound it some more. He ran for 1,005 yards on 170 carries and scored five touchdowns on the ground, but also added 14 catches for another 142 yards in the air. If things break his way this fall, he could be the man slamming the door shut late in games.

Barnes held things down in the middle of the Illini defense last year, but he did it well in his first year as part of the starting lineup and finished 2021 with 80 tackles, six tackles for loss, two sacks, two forced fumbles, and six passes defended.

The Illini offense did a couple of things well last year, but they averaged only 5.01 yards per play (110th among FBS teams), mustered just 38% of available yards per drive (113th), and scored only 1.63 points per drive (110th) . Much of the blame for this can be laid at the feet of a passing game that completed only 51.2% of attempts and managed 5.8 yards per attempt, which explains why Tony Petersen was replaced as offensive coordinator by Barry Lunney Jr., the architect of UTSA’s attack over the past two seasons.

He’ll have some pieces to work with in Brown and fellow running back Josh McCrayas well as Williams and tight end Luke Ford (15 catches, 114 yards, two TDs), but that might be for naught if Syracuse transfer quarterback Tommy DeVito or incumbent Arthur Sitowski can’t improve upon last year’s level of play. The Illini also have to replace two NFL Draft picks along the offensive line, too, though Alex Palczewski‘s return (79.4 overall PFF grade, seventh among Big Ten tackles) gives them at least one reliable anchor.

If the offense has work to do, the defense can feel pretty good about picking up where it left off last season. Defensive coordinator Ryan Walters is a rising star who earned a pay raise after helping the Illini finish 27th in points allowed per drive and 34th with 5.24 yards per play allowed, the latter of which was the team’s best mark since 2015.

On the defensive line, Randolph and defensive end Jer’Zhan Newton (50 tackles, four TFLs, three sacks) provide a very strong foundation on which to build, though replacing departed stars Isaiah Gay and Owen Carney won’t be easy. The linebacker unit will need some new contributors to step up, too, though a return to form from Calvin Hart Jr.who missed nearly all of last season with an ACL tear, and steps forward from nickelback Jartavius ​​Martin (55 tackles, seven passes defended, 3.5 TFLs) and Virginia Tech transfer Alec Bryant could make those losses sting less.

The secondary has some reloading to do, too, after Kerby Joseph was selected as a third-round NFL draft pick. Witherspoon and safety Sydney Brownthe Illini’s leading tackler in 2021, should provide veteran leadership and playmaking but one athlete to keep an eye on is Tahveon Nicholsonwho started two games and is expected to start at cornerback full-time this fall.

This may not be the prettiest game on the Mountain West’s non-conference schedule, but Wyoming fans should appreciate that Illinois’s path to success will be very similar to their own in 2022. The problem for this particular game, though, is that the Illini defense appears better equipped to put the clamps on an offense more consistently.