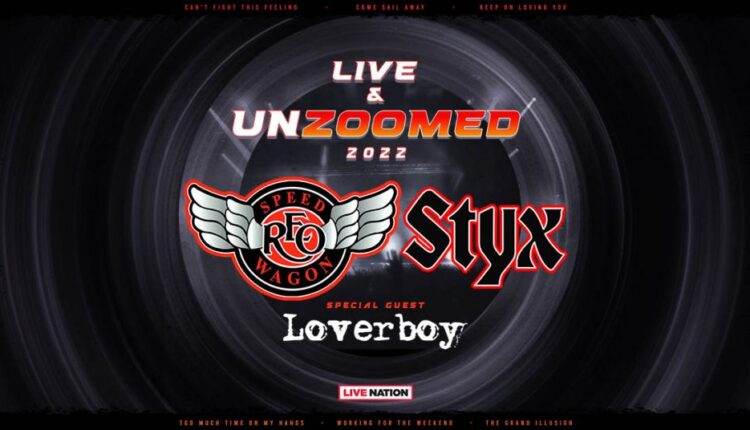 It has four years since REO Speedwagon and Styx joined forces for a summer co-headlining tour. While the world has undoubtedly changed since then, classic rock fans’ desire to rock out has not. With special guest Loverboy in tow, the Live & UnZoomed Tour kicked off in late May 2022 in Grand Rapids, Michigan at the Van Andel Arena, and this writer had the pleasure of seeing the Northwell Health At Jones Beach Theater stop of the Live Nation- produced tour in Wantagh, New York on August 21, 2022.

Formed in 1967, signed in 1971 and fronted by vocalist Kevin Cronin since 1972, REO Speedwagon undoubtedly made an international impact 1980’s Hi Infidelity. That landmark album reportedly spent 15 weeks in the #1 slot of Billboard’s Top 200 album charts, and has since earned the RIAA’s coveted Diamond Award in surpassing sales of 10 million units in the United States alone. Ultimately, REO Speedwagon released nine consecutive albums all RIAA-Certified Platinum — or higher — between 1977 to 1989, scoring more than 40 million albums sold around the globe in the process.

REO Speedwagon — as comprised of Cronin and bandmates Bruce Hall (bass), Neal Doughty (keyboards), Dave Amato (guitar) and Bryan Hitt (drums) — closed the evening with a hits-filled set, including “Ridin’ The Storm Out ,” “Can’t Fight This Feeling,” “Time For Me To Fly,” “Tough Guys,” “Roll With The Changes,” “Keep On Loving You” and “Take It On the Run.” As the group’s last studio album of original material was 2007’s Find Your Way Home, it is clear that the Champaign, Illinois-founded act is rooted in delivering a nostalgia-oriented performance. But it has been 40-plus years since Hi Infidelity initially made waves, and the highly entertaining set delivered by the group at Jones Beach truly had something for anyone seeking a tight, energy-filled, sing-along-heavy rock show experience.

Of note about Styx’s set is that it did not include all of the band’s radio staples, even with close to 90 minutes spent onstage. Among the commercially-successful songs missing in action were “Babe,” “The Best Of Times,” “Show Me The Way” and “Sing For The Day”; arguably, Shaw could have performed a Damn Yankees track like “High Enough,” which Styx has been known to do as part of a medley on prior tours. All in all, Styx remains in peak form in 2022, and Styx is a band I hope to see again live in a beautiful open-air venue like Northwell Health At Jones Beach Theater again in the summer of 2023.

While first of three on the Live & UnZoomed Tour, Loverboy is truly a headlining act in his own right. Carrying over 40 years of history, Loverboy — which still includes members Mike Reno (vocals), Paul Dean (guitar) Doug Johnson (keyboards) and Matt Frenette (drums), with Ken “Spider” Sinnaeve replacing the late Scott Smith on bass — has sold more than 10 million albums. Its discography included four multi-platinum titles, like Get Lucky and Lovin’ Every Minute Of It. In March 2009, the group was inducted into the Canadian Music Hall Of Fame. Much like Styx, there was not enough time for all the hits within its 50-minute time allotment, but the tracks played sounded solid and well-received.

Ultimately, the Live & UnZoomed Tour provided to be a fun evening full of rock radio staples from three different artists. It was one of the best tours I have seen in 2022, and I look forward to catching all three of the tour’s acts next summer, no matter the venue. Tour dates and more information related to Styx, REO Speedwagon and/or Loverboy can be found online by clicking here, here and here.

Darren Paltrowitz Darren Paltrowitz is a New York resident with over 20 years of entertainment industry experience. He began working around the music business as a teenager, interning for the manager of his then-favorite band Superdrag. Since then, he has worked with a wide array of artists including OK Go, They Might Be Giants, Mike Viola, Tracy Bonham, Loudness, Rachael Yamagata, and Amanda Palmer. Darren’s writing has appeared in dozens of outlets including the New York Daily News, Inquisitr, The Daily Meal, The Hype Magazine, All Music Guide, Guitar World, TheStreet.com, Businessweek, Chicago Tribune, LA Times, and the Jewish Journal. Beyond being “Editor At Large” for The Hype Magazine, Darren is also the host of weekly “Paltrocast With Darren Paltrowitz” series, which airs on dozens on television and digital networks. He has also co-authored 2 published books, 2018’s “Pocket Change: Your Happy Money” (Book Web Publishing) and 2019’s “Good Advice From Professional Wrestling” (6623 Press), and co-hosts the world’s only known podcast about David Lee Roth, “The DLR Cast.”