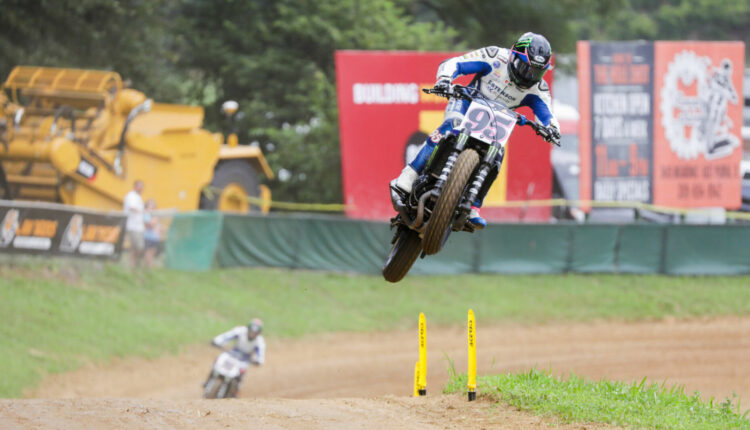 DAYTONA BEACH, Fla. (July 26, 2022) – While the opening nine rounds of the 2022 Progressive American Flat Track season played out on oval dirt tracks of all sizes, the second half will kick off on Saturday, July 30, with the first TT. And it’s not just any TT, it’s the World Famous SC2 Peoria TT presented by Country Saloon.

Set in the Peoria Motorcycle Club’s scenic natural amphitheater in Peoria, Illinois, and boasting history and tradition that’s nearly unrivaled across two-wheeled sport, the Peoria TT easily ranks among the most prestigious races on the Progressive AFT slate.

Reigning Mission SuperTwins presented by S&S Cycle champion Jared Mees (No. 1 Indian Motorcycle/Progressive Insurance FTR750) has accomplished almost every possible goal in his Hall-of-Fame-worthy career, but victory at the Peoria TT has proven just outside his grasp .

While Mees has finished as the race’s runner-up on multiple occasions, he’ll enter this year’s 75th edition of the fabled race as the underdog. Despite his vast skill and past success, Mees will be faced with perhaps the most stacked premier-class Peoria TT field in recent memory.

If the opposition didn’t look formidable enough already, “King” Henry Wiles (No. 17 Willy Built Kawasaki Ninja 650) is set to make his Progressive AFT return this weekend. Wiles is the most successful rider in the race’s history, assembling an incredible 14-race win streak from 2004-2018.

Other riders who could have say include ’19 race runner-up Bronson Bauman (No. 37 Latus Motors Racing Harley-Davidson XG750R) and last year’s fourth-place finisher, Jarod Vanderkooi (No. 20 Mission Roof Systems Indian FTR750), not to Mention the Mission Production Twins Challenge entrants, who have the potential to prove particularly potent in Peoria.

Janisch’s three-prior undercard Peoria TT victories is what earned him his shot on the Vance & Hines XG750R initially with the team in need of an injury replacement as it headed to the venue a year ago. Janisch has since shed his reputation as a TT specialist with the sort of all-around excellence required to build a title lead in a season thus far absent of TTs, but that discipline-specific expertise remains.

A year ago, Janisch finished third in his first ever ride on the bike. He’s much more at home aboard it now and should only prove that much more formidable. And he’ll need to be in order to overcome last year’s winners and second-place finishers, Dan Bromley (No. 62 Vinson Construction/Viper Air Yamaha MT-07) and Ben Lowe (No. 25 Mission Foods/Roof Systems Yamaha MT -07).

With Janisch expecting to make hay, the weekend will be of equal importance to defending champion Cory Texter (No. 1 G&G Racing/Yamaha Racing Yamaha MT-07), who currently sits on point out of first.

Others who could make his life difficult include the returning Johnny Lewis (No. 10 Moto Anatomy X Powered by Royal Enfield 650) and Cole Zabala (No. 51 Memphis Shades/Corbin/Vinson Yamaha MT-07), who have each previously demonstrated impressively TT chops.

The Peoria TT will be the ultimate test of Kody Kopp (No. 12 Red Bull KTM Factory Racing 450 SX-FFE)’s recent Parts Unlimited AFT Singles presented by KICKER invincibility. Kopp certainly has the skill to extend his four-race win streak in Peoria, flashing front-running pace a year ago before ultimately finishing down in ninth position.

The 17-year-old has taken his game to another level in ’22, and as such, he’s expected to be a serious player. However, he’ll be contending with a field anxious to bring his run of unmitigated success to a halt, led by the likes of last year’s Peoria TT winner Max Whale (No. 18 Red Bull KTM Factory Racing 450 SX-FFE) and 2017 DAYTONA TT winner Dalton Gauthier (No. 79 American Honda/Progressive Insurance CRF450R).

Visit https://store.americanflattrack.com/ebooking/ticket/view/id/3695 to reserve your tickets today. General Admission tickets are just $35 with kids 12 and under free when accompanied by an adult. There’s also the VIP Admission ticket that includes access to the

Gates will open for fans at 10:00 am ET/6:00 am PT with Opening Ceremonies scheduled to begin at 2:30 pm ET/11:30 am PT ahead of the day’s race program. You can catch the live stream of all the weekend’s racing activities on FansChoice.tv. FansChoice.tv provides free-to-view live streaming of Practice and Qualifying. FansChoice.tv subscribers will then be able to watch the drama unfold from Opening Ceremonies through the Semis, Main Events, and podium celebrations. FansChoice.tv offers two subscription options, granting unlimited access to premium AFT content. Monthly subscriptions start at just $7.99, while a six-month subscription is available for $44.99.

The SC2 Peoria TT presented by Country Saloon will premiere on FS1 on Sunday, August 7, at 11:30 am ET/8:30 am PT, including exclusive features, cutting-edge aerial drone and onboard footage, and expert commentary.

FOX Sports and FansChoice.tv are the official homes for coverage of Progressive American Flat Track. For the 2022 season, all races will premiere in one-hour telecasts on FS1 during highly desirable weekend time slots. The complete schedule can be viewed at https://www.americanflattrack.com/events-foxsports. FansChoice.tv provides live streaming coverage of every Progressive AFT round at http://www.FansChoice.tv.

The 10 Best Colleges for STEM Majors