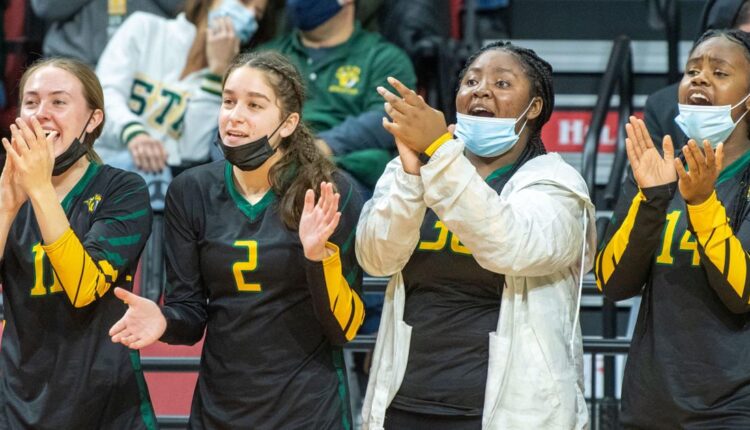 Jon Adkins’ third season in charge of the Bulldogs was one of the most successful in program history, as they won each of their first 11 games and surged to the Class 5A quarterfinals. And there should be good news on the horizon for Adkins, as many of his top contributors were underclassmen. Quarterback Wyatt Bohm, wide receiver Quenton Rogers, defensive lineman Jack Gallier and linebacker Nick Golden all return after earning News-Gazette All-Area first-team status last fall. Guys like Mateo Casillas and Luke Johnson also project to make an impact later this year.

St. Thomas More volleyballThe Sabers find themselves in a different position from that of Mahomet-Seymour football. STM is coming off a Class 1A state-championship victory in 2021 but since have graduated three Division I volleyball players in reigning NG All-Area Player of the Year Caroline Kerr, Anna McClure and Colleen Hege. Coach Kelly McClure also has stepped aside, with the Sabers now overseen by former Champaign Central boss Evan Hook. The cupboard is far from bars, though, as STM still has standout athletes like Mallory Monahan, Shannon Monahan, Erin Henkel, Julia Johnson and Addie Kerr in the fold.

Kiel Duval has settled in as the Spartans’ coach, now preparing for his fifth season at the helm for SJ-O. The 2021-22 campaign resulted in a Class 2A regional championship, even with a fairly young roster at Duval’s disposal. The departures of seniors Andrew Beyers and Evan Ingram will sting, but the Spartans still can look to uber-talented wing Ty Pence as a true program leader. The Division I prospect will be flanked by reliable teammates such as Logan Smith, Coy Taylor and Brock Trimble, and it seems as though any group of SJ-O players is destined to receive a surprise breakout effort along the way.

Fisher softballThough Ken Ingold’s Bunnies came up one win short of a Class 1A regional title this spring, there still is sufficient promise for the future. That’s because Fisher boasted just one senior athlete on his 2022 roster, Riley Parks. And those Bunnies still managed to finish with a 16-8 record, indicating they could post even stronger results in 2023. Kallie Evans, Kylan Arndt, Karsyn Burke, Kailey May, Alexis Moore and Abbie Stipp all played a meaningful role in what Fisher accomplished during the most recent season, and Ingold has created a culture of success that the Bunnies thrive within.

Colin Likas is the preps coordinator at The News-Gazette. He can be reached at [email protected], or on Twitter at @clikasNG.