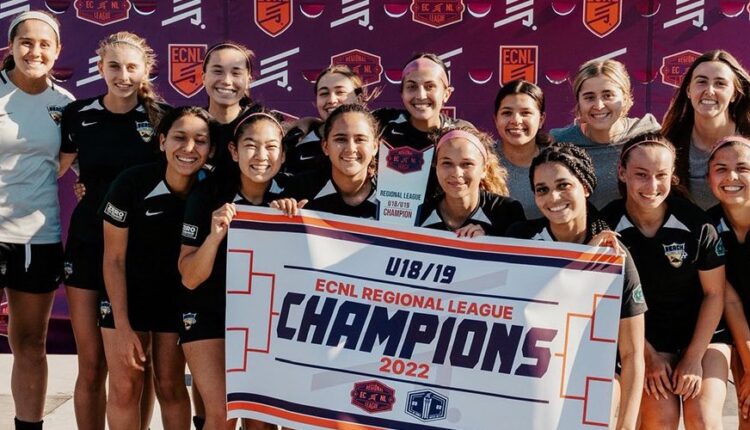 Running alongside the ECNL Girls National Finals, the inaugural ECNL Girls Regional League Finals has been exceptional. There have been exciting games at every age group, featuring upsets, penalty kicks, drama and much more.

After days of games, Saturday featured the championship matches for the U16, U17 and U18/19 age groups, and once again, the matches did not disappoint.

Starting with the opening whistle, FC Dallas continued its momentum from winning its previous two games and pressured the Rockford defense early on. Rockford defended well, keeping the ball out of its end, and as the half wore on, started to use that solid defensive play to build up the offense.

As the two sides traded scoring chances, FC Dallas converted first. After forcing a turnover in the midfield, FC Dallas had numbers moving forward and was able to capitalize, knocking home a back-post pass to take a 1-0 lead 15 minutes into the match.

Ten minutes later, FC Dallas doubled its lead with another cross and finished. After a leading pass to the right corner, FC Dallas sent a ball into the box that was saved by the Rockford keeper. However, FC Dallas was crashing the net, burying the rebound to take a 2-0 lead.

Now armed with a steady lead, FC Dallas contained the Rockford attack and took the 2-0 lead into the half.

In the second half, FC Dallas continued to maintain possession, methodically working the ball up the pitch, looking for the chance to strike. But with each attack, Rockford kept the ball out of the net.

As the second half counted down, Rockford became more and more determined to cut into FC Dallas’ lead. Sending numbers forward, FC Dallas was forced to primarily defend, but the backline stood strong.

At the final whistle, FC Dallas earned a well-deserved clean sheet and completed their season with a Regional League title.

For the U17 Regional League title match, the top-seeded Slammers FC battled against the No. 2 Sporting Michigan, pitting two of the best teams in the league against each other with a trophy on the line.

From the opening whistle, Slammers FC played a stellar game, owning possession and controlling the pace of play. Throughout the first half the team imposed their will, peppering the Sporting Michigan back line with shots and scoring chances.

Midway through the first half, Slammers FC was finally rewarded for the offensive efforts, knocking home a shot to take a 1-0 lead.

Owning a 1-0 lead, Slammers FC continued to press forward, closing out the first half with another goal to take a 2-0 lead.

In the second half, Sporting Michigan came out looking for their first goal of the game, forcing Slammers FC to play strong defense to maintain their clean sheet. After a couple big saves from Slammers FC, the team countered and raced down the field, putting one more goal past Sporting Michigan for the 3-0 lead.

After the third goal, Slammers FC shut the door on any Sporting Michigan comeback and at the final whistle, Slammers FC captured the U17 Regional League title.

In a battle between the No. 1 seed and no. 5 seed in the oldest age group, Beach FC ended their season and ECNL careers with a Regional League Championship, defeating Solar SC in a tight contest.

Both Beach FC and Solar SC opened the game by feeling each other out in the middle of the field, methodically working up and down the pitch with limited success. Midway through the match, Solar SC started to find their footing and pressed forward, earning multiple solid looks on net, but Beach FC made each save to keep the game even.

After the flurry of saves, Beach FC marched down the field, generating their best scoring chance of the game. In the 30th minute, the team converted, giving the California squad a 1-0 lead.

Immediately following the goal, Solar SC doubled their efforts to even the score, but with each attack, the Beach FC defense stood strong, taking their lead into halftime.

Coming out of the break, Beach FC took their attack to Solar SC, opening the second half with multiple scoring chances right off the bat. As Beach FC pushed forward, Solar SC countered with attacks of their own, creating an exciting back and forth up and down the pitch.

Solar gained momentum midway through the half, earning consistent high-danger looks on net. But once again, the Beach FC backline stood tall, deflecting and making saves to keep their lead at 1-0.

Beach FC continued to play strong defensive play, closing out the game by limiting scoring chances and defending the middle of the pitch. By the final whistle, Beach FC maintained the clean sheet.

And with the 1-0 win, Beach FC clinched the ECNL Girl Regional League Championship.