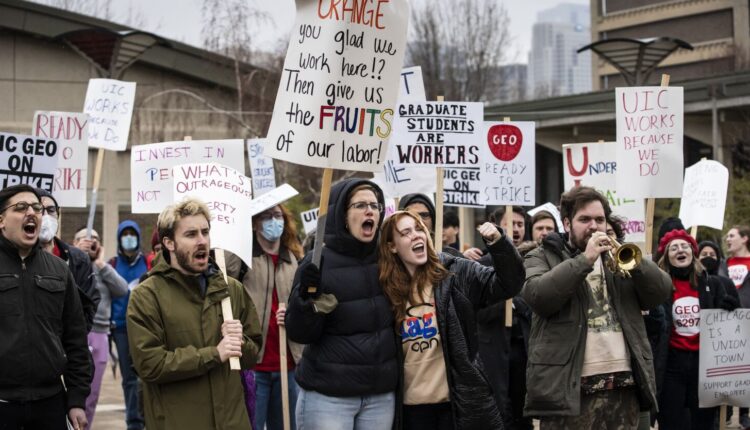 Graduate student workers at the University of Illinois-Chicago on Monday began a strike as negotiations between the student workers’ union and the administration stalled despite the intervention of a federal monitor.

More than 100 members of the Graduate Employee Organization staged a rally Monday on the Quad in the heart of the UIC campus, as students were headed between classes. Graduate workers, who primarily serve as teaching and research assistants, said the two sides were thousands of dollars apart on salaries; the students also want further reductions of student fees that can amount to more than 10% of the $20,000 minimum annual salary.

The strike falls just over a year since GEO’s contract expired. The 1,500-member union and the administration began bargaining in April 2021, but negotiations reached a stalemate once the discussion reached economic issues. The union held a strike vote April 1, and with three-quarters of the membership voting, 97% cast ballots in favor of the strike, GEO President Adam Pratt said.

Graduate student workers at University of Illinois-Chicago, represented by the Graduate Employee Organization, on strike for higher wages and more host a rally Monday afternoon on the Quad at the heart of the university’s campus.

“We should not have to pay to go to UIC,” said GEO member Veronica Shepp, drawing cheers from a throng of picketing GEO members. “We hope this [strike] lights a fire under them.”

In a message posted to the UIC website, Chancellor Michael D. Amiridis said the strike by 1,500 graduate workers would not effect scheduled classes, or final exams for the spring semester that ends in a few weeks.

“Students and parents can be assured that educational objectives will be fulfilled, and grades should not be affected,” Amiridis wrote.

But some professors had canceled classes or moved them online to avoid crossing the GEO picket, and have rescheduled conferences with students.

Eating lunch in a dining hall off the quad, UIC senior Luis Lopez said he’d already had to reschedule appointments with a graduate assistant, another disruption to a college career that has been disrupted by the COVID pandemic and several union work stoppages. Lopez said students at UIC have far more contact with graduate students than with full-time faculty, and he worries about not being able to confer with grad students as he closes out his final semester at UIC.

“I respect that they have to strike, and that they do deserve raises and the other things,” he said. “But I am nervous about what happens if I need extra help going into finals. I want to finish strong.” Graduate student workers at University of Illinois-Chicago, represented by the Graduate Employee Organization, on strike for higher wages and more host a rally Monday afternoon on the Quad at the heart of the university’s campus.