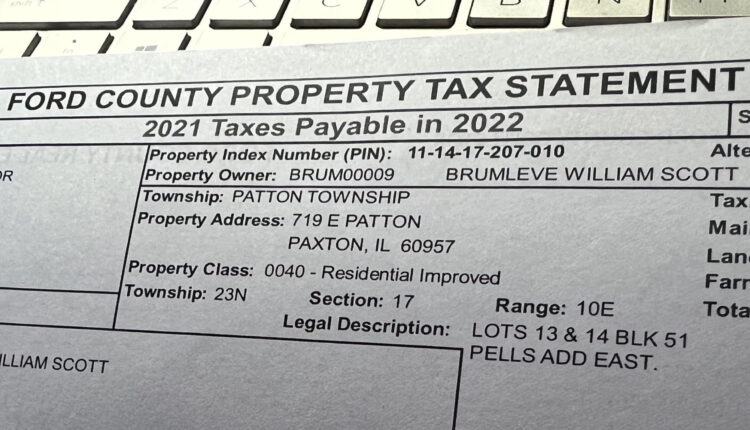 By WILL BRUMLEVE
[email protected]

GIBSON CITY — Ford County and Gibson City officials met Friday morning to continue to work toward a solution to correct the accidental over-billing of the city’s landowners on their 2021 real estate tax bills.

A two-sentence statement posted Friday on the city’s Facebook page provided an update on the still-unresolved situation and encouraged Gibson City taxpayers to pay their first installment by the Sept. 23 deadline to avoid any interest fees, as the deadline remains unchanged.

Gibson City Mayor Dan Dickey released a statement four days earlier expressing the need for his city and the county to work toward an “expeditious remedy.” To address a similar issue in the nearby village of Fisher last year, Champaign County had tax bills recalculated, reprinted and re-mailed, and Dickey said he asked Ford County to do the same.

“At this time we believe we should be able to do the same,” Dickey said in his Sept. 12 statement, “but time is of the essence.”

Ford County has already contacted its tax software contractor — Computer Information Concepts Inc. of Greeley, Colo. — to find out the cost to recalculate, reprint and re-mail the tax bills. The city has offered to pay half of the costs incurred, including printing and postage fees, and to provide volunteers to help the county complete any necessary tasks.

During an initial Aug. 26 meeting with county officials to discuss the matter, Gibson City officials noted the potential consequences of further delays in correcting the situation, including the hardship it could bring to businesses and citizens already dealing with inflated costs and the potential impacts to the city’s tax-increment financing (TIF) districts.

The over-billing of Gibson City’s taxpayers was discovered shortly after the bills were mailed by the county last month. Ford County Clerk & Recorder Amy Frederick accepted blame and apologized, explaining that she inadvertently misapplied to Gibson City’s tax formula about $232,714 in bonds that the city intended to have abated. City officials also missed the error, as they mistakenly signed off on it before bills were finalized and mailed.