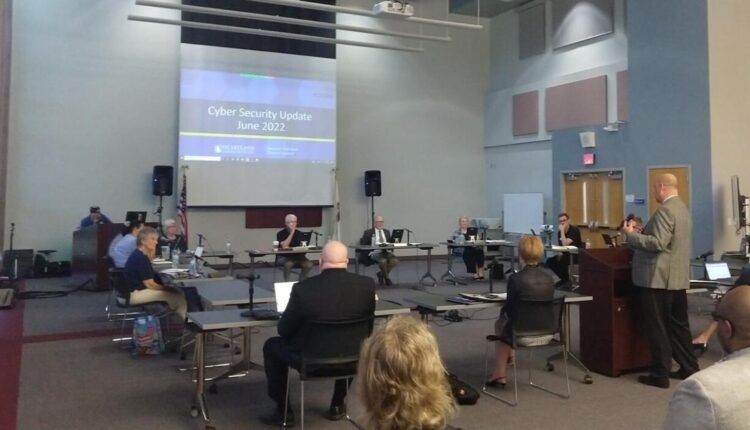 NORMAL — Heartland Community College has spent almost a third of the $1 million that it dedicated to improving cybersecurity last June after a cyberattack in fall 2020.

Heartland Chief Information Officer Scott Bross updated the Heartland board of trustees Tuesday night on the changes since the funding was announced in June 2021.

“IT is doing great when you guys are not talking about IT, and you guys have not talked about IT in about a year,” Bross said.

Many of the improvements focus on protections for the college’s data center and backups. The attack prevented Heartland from accessing files, which shut down classes and took months to fully fix.

“That’s one of the things they really attempt to do, is put down your ability to actually do business,” Bross said.

Data center changes included adding more detection for unusual activity and a review of the college’s firewall. Backup improvements include off-site backups and a move, in progress, to what is called “air-gap” backups, which are not connected to the institution’s network.

The college also is separating more of the widely accessed network from the parts of the network that hold important and valuable information, Bross said.

Even just implementing a better plan for patches and updates to servers can be important in preventing hackers from exploiting the system, he said.

Scott Bross, chief information officer at Heartland Community College, updates the board on June 15, 2021, on security measures taken since the college was the victim of a cyberattack in October 2020. The school has since spent around $300,000 out of $1 million dedicated to addressing cybersecurity.

“If they’re not being updated, we can be attacked in just a brief window (…) this keeps us current, it keeps us in action,” Bross said.

Heartland also requires multifactor authentication for employees. This is a trend far beyond education, he said, and is becoming a standard practice across internet services. The multifactor addition is one of the more visible changes that employees encounter daily.

President Keith Cornille said the college is also continuing its education efforts for students and employees to improve the human element of cybersecurity.

Bross plans to implement yearly third-party penetration testing, in which the college hires experts who then try to hack into the system. This year the college gave the outside company a student login account.

The test did reveal some issues the college should address, but nothing drastic, Bross said.

Later at the meeting, the board heard plans for the tentative fiscal 2023 budget, with a public hearing set for Sept. 20 before the scheduled board meeting.

Heartland Controller Justin Knorr said the staff anticipates a balanced budget of around $37 million in the education fund and operations and maintenance fund.

Expenses are expected to increase due to salary raises and rising costs generally, Knorr said. The balance of where funds are being spent, and where they are coming from, is expected to stay substantially the same as the 2022 budget.

After a closed session, the board approved a new collective bargaining agreement with the Heartland Faculty Association, which represents full-time faculty at the college. The agreement includes raises of 2.5%, 3% and 2.5% over the next three years, respectively. The contract is for three years.

“The HFA is committed to offering students quality educational experience, which can best occur when responsible compensation and supportive working conditions are provided for educational professionals,” the union said in a statement sent out by the college after the meeting.

Part-time faculty are represented by a separate union.

In the same press release, HFA President Cherie Rankin said that the bargaining process included a salary study that led to one-time adjustments for most faculty, along with the scheduled raises.

HFA President Cherie Rankin told The Pantagraph that most items up for negotiation were decided “quickly and smoothly.”

The last two years of teaching during the pandemic has shown a need for flexibility in instruction, Rankin said.

“During COVID, the value of flexibility — in terms of both location of work and student access to instructors — was clear. That flexibility will largely continue whenever possible,” she said.

Photos: A look inside the 150-year-old David Davis Mansion

The garden that belonged to Sarah Davis in the 1870s features 70 heirloom plants from the era and almost two dozen surviving, original plants that Davis tended herself.

The tree was struck by lightning, said site superintendent Jeff Saulsbery. The Davis family decided to save it with metal rods, limestone and tin sheeting from The Pantagraph.

A sugar maple — patched with metal sheeting said to have come from The Pantagraph — stands at the David Davis Mansion.

Site Superintendent Jeff Saulsbery, left, and Adrienne Huffman stand in the kitchen at David Davis Mansion on June 16. The icebox behind Saulsbery was state-of-the-art for the time period.

The stove, oven and water heater are all original to the 1872 building. The nook to the right of the heaters is to the china closet which separates the kitchen from the dining room.

A portrait of Judge David Davis hangs in his former mansion, which was completed in 1872.

Site Superintendent Jeff Saulsbery speaks June 16 in the library at David Davis Mansion in Bloomington. The mansion is marking its 150th year.

Master gardener John Elterich works in the Clover Lawn garden on June 16. The yucca plant came from an expedition by family friend John Wesley Powell through the Colorado River.

Get our local education coverage delivered directly to your inbox.