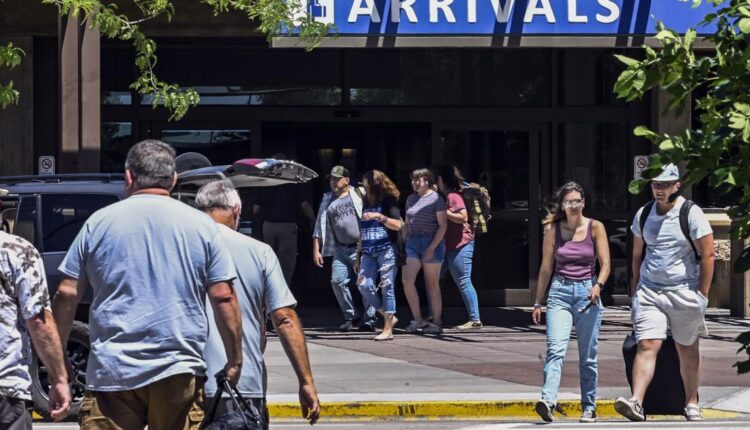 Passenger traffic at Rapid City Regional Airport began the year on a strong note, with a 26% increase over 2021 in January, February and March, but as fuel prices and airline ticket prices increase — fewer travelers are taking to the skies for the summer months .

“One of the things we’re seeing is less air service, as everybody is this year. We’re going to have a natural impact on that,” Airport Executive Director Patrick Dame said. “We are seeing bigger aircraft coming in, but less frequency and fewer destinations.”

High fuel prices, a shortage of airline pilots and inflation are impacting air travel across the nation in 2022, and Rapid City is not immune.

Passenger counts through June have not been released yet, but after slightly higher numbers in April, May’s numbers took a dip, with travel through Rapid City down nearly 23% when compared to 2021.

Rapid City Regional Airport is served by Allegiant Air, American Airlines, Delta Air Lines and United Airlines. During the 2021 summer season, the airlines increased to 33 non-stop routes to 32 destinations, with the vast majority of those routes occurring during the Sturgis Motorcycle Rally.

Allegiant suspended their flights from Rapid City to Punta Gorda, Florida and will not be offering their seasonal flights during the rally to and from Appleton, Wisconsin; Grand Rapids, Michigan; Indianapolis; Knoxville, Tennessee; Nashville, Tennessee; Peoria, IL; Pittsburgh; and Orlando (Sanford), Fla.

Delta temporarily suspended its direct flights to Salt Lake City, but resurrected the service as a seasonal offering with once-daily flights. In 2021, Delta also offered direct service from Rapid City to Atlanta and Detroit. Those flights have been suspended in 2022.

United brought back daily direct routes to Chicago and once-weekly flights to Newark, New Jersey for the summer season. The airline has not made any announcements related to previous seasonal direct flights to Houston, Los Angeles or San Francisco for 2022.

American Airlines is fairing a bit better than the other carriers at Rapid City. The company brought back all of its seasonal flights to Charlotte, North Carolina, Chicago, New York City and Phoenix.

Dame said the reduction in flights by the airlines means fewer people are traveling to Rapid City. The higher costs and inflation are not only impacting the airport itself, but are having an impact on the region as well.

“I expect there will be some impact on that as we go through the year,” Dame said. “I think a lot of places within the Hills are going to see that overarching impact of high fuel costs, pilot shortage and everything that comes in with our industry.”

Dame told the Journal that it is tough to forecast, but he does expect a reduced number of passengers this year.

“What we do know is that there will be fewer seats in the market,” he said. “We do have bigger aircraft coming in, like the Airbus and Boeing 737s, but not at the frequency. So, I bet we may have a total reduction in seats.”

Dame also addressed one of the most common concerns he hears, and that is the price for an airline ticket to fly in and out of Rapid City — something the airport can’t control.

“Let’s face it, everybody’s having staffing issues. This isn’t just pilots, all industries are suffering through this time right now.”

Williamsport Crosscutters: Etzel And Evans Ready For The 2022 MLB Draft