GREENSBORO, NC — A world record went down on Thursday at the AAU Junior Olympic Games, and it was a major one.

Early on, this much was clear: Whitaker was in a league of his own.

He cleared his opening height of 4.10m (13-5.25) with just three athletes still in the competition. Then he skipped the next height, instead opting to punch up to 4.40m. There, he flew over the bar on his second attempt. Mason Rhea, who finished in second place, cleared 13-11.25.

With his competition out at that point, Whitaker and his coach made a concerted decision.

“Me and my coach were looking for that record before this,” he said. “And first we went for the national record. Had to get that before we went to the world.”

And so it was decided. Whitaker was jumping toward records.

The performance was no doubt a legendary one. He entered the Games having cleared 14-1.25 at his region meet, though on the season, Whitaker said, he cleared 15-10.

He needed just a few more inches for a lasting record. 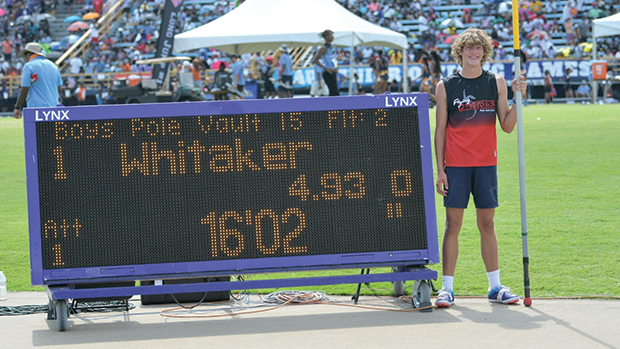