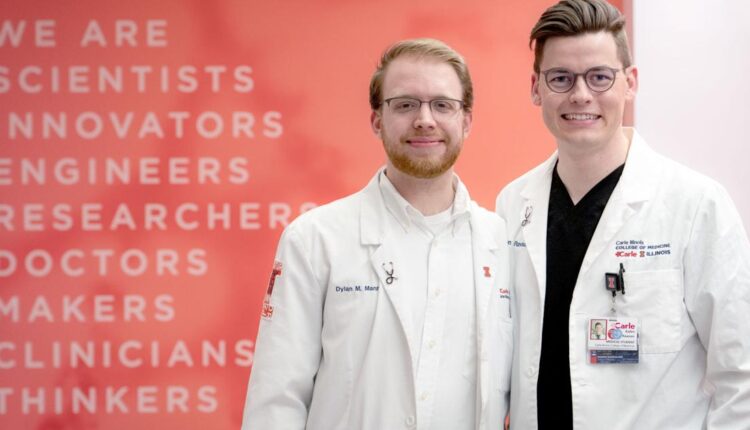 URBANA — Kaden Rawson was 19 when he first went to Russia on a service mission through his church and helped support Ukrainian refugees.

Now, Rawson and Dylan Mann, both students at the Carle Illinois College of Medicine, are preparing to launch a collection drive to send food, survival items, baby supplies and medicine to recently displaced Ukrainian refugees in Poland.

Rawson is in his first year at Carle Illinois, and Mann is a fourth-year student.

Med-school spokeswoman Ryann Monahan said Carle Illinoisis supporting this effort, which will be launched Saturday from noon to 5 pm in front of the Alma Mater statue on campus.

Initially, they plan to collect supplies at the Medical Sciences Building at 506 S. Mathews Ave., U through March 19. Other collection sites may be added, Rawson said.

He and Mann are partnering with Miami-based Global Empowerment Mission, which has provided a list of needed supplies and will ship the items collected in the upcoming drive, Rawson said.

Also helping is first-year medical student Michael Pozin, whose family came to the US from Kyiv, Ukraine, just before the fall of the Soviet Union.

Originally from Salt Lake City, Rawson, now 25, recalled his two years in the Western Siberia and Ural Mountains region of Russia as a special time in his life.

While it was hard being away from his family, “I gained a new part of myself through service,” he recalled.

During those years, he taught English and worked with organizations on such projects as gardening, hospice and construction. He also helped support refugees who had been displaced from Donetsk during insurgency fighting.

“It made this current conflict even more real to me,” Rawson said.

He hopes to return to Russia or Ukraine after finishing his education to serve with Doctors Without Borders, depending on where there is a need and what’s allowed, he said.

An Iowa native, Mann said he has no personal ties to Ukraine or Russia, but has been watching the invasion unfold.

“I just knew I had to do something,” Mann said.

Since he can’t fly to Poland now to help, he said, he decided maybe he could send things to refugees. He reached out to fellow students looking for others who wanted to get involved and heard from Rawson immediately.

Rawson said he and Mann hope to discuss the possibility of medical-supply donations with the Carle Foundation.

Rawson said they don’t plan to collect money as part of this effort.

Many things being sought for collection are common everyday items people have around their homes, including:

Over-the-counter pain relievers (such as ibuprofen, acetaminophen and aspirin) and cold and flu medicines.