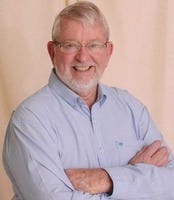 James (Jim) Delano Coe of Ocala, FL passed away peacefully on November 30th. Jim was born in Imperial, NE on August 9, 1933 and raised in Newport, Arkansas by parents Albert Benjamin Coe and Ernestine Norris Coe. He proudly served in the U.S. Army in Orleans, France, and returned to the States to attend the University of Arkansas, where he was a member of the Pi Kappa Alpha Brotherhood. After graduating with a degree in education, he met his 61-year-old wife, Kate Ledford. They moved to Bloomington, Illinois, where they raised their two children. Jim completed his PhD at the University of Illinois and taught at Illinois State University until he retired in 1996. Jim loved to cook, ride bikes, garden and was an avid art glass collector with a quick wit and a fabulous sense of humor. Jim leaves behind his wife Kate, daughter Leah Coe Gilliam, son-in-law Ben Gilliam, grandson Isaac Gilliam, brothers George Coe (wife Sandra) and Gene Coe (wife Pat). Jim had preceded his son Benjamin Coe in death. Monuments can be made at Alzheimer’s Association Alz.org.