Long Wait for Justice: People in Jail Face Delays for Mental Health Care Before They Can Stand Trial 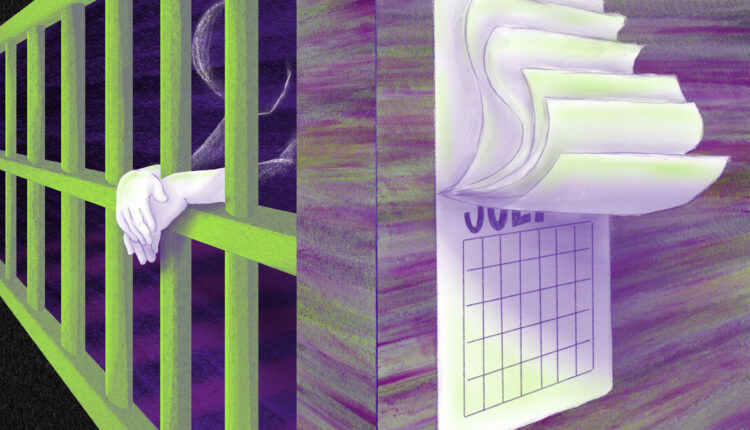 Beau Hampton’s long wait for psychiatric treatment began last year, after he was accused of attacking his foster father and charged with a misdemeanor.

The 18-year-old Hampton, who has a long history of mental illness, sat in jail east of Atlanta for four months waiting for an expert to evaluate whether he was mentally fit to stand trial. In February, a state psychologist found Hampton incompetent.

Then Hampton had to wait to get a placement in a state psychiatric hospital so he could receive treatment to meet the legal threshold for competency. The treatment delay frustrated a Walton County judge, who said Hampton’s condition worsened in the crowded jail and in March ordered him to be transferred within 24 hours to a state hospital. The Georgia Department of Behavioral Health and Developmental Disabilities, which runs those psychiatric hospitals, didn’t comply, and the judge held the agency commissioner in contempt of court a month later.

Such long delays for state psychiatric hospital services are playing out in jails across the United States. People in jail with serious mental illness — and who cannot stand trial because of their condition — are waiting months, or even more than a year, to start receiving the care needed to “restore” their competency to stand trial. The legal standard is that an individual charged with a crime must be able to participate in their defense.

In Georgia, 368 people who have been deemed incompetent sit in local jails waiting to get treatment to stand trial, according to the state. More than 900 are waiting for just the first step in the process, a “forensic evaluation.”

Similar delays have sparked litigation in many other states.

The Indiana Protection and Advocacy Services Commission filed a lawsuit in May against state officials over the lag in psychiatric services, claiming the delays violate defendants’ due process rights. Oregon has faced strict time limits set through a 2002 court case, and its backlog stood at 55 people as of May 20.

Alabama faces a consent decree, but “folks are still waiting, on average, a couple hundred days to be admitted to the facilities to undergo either those evaluations or the treatment,” said Shandra Monterastelli, a senior staff attorney at the Alabama Disabilities Advocacy Program.

North Carolina’s waitlist for “restoration” treatment has risen to 140, while Colorado — another state under a consent decree — has 364 waiting. In Texas, the number is much higher — more than 2,000 — a backlog that has prompted a lawsuit. Montana has had dozens waiting as well.

“It would be hard to overstate how big a concern mental health issues are in county jails,” said Michele Deitch, a criminal justice expert at the Lyndon B. Johnson School of Public Affairs at the University of Texas-Austin.

More than 2 million people with serious mental illness are booked into jails nationwide each year, often for nonviolent “nuisance” crimes such as loitering or vagrancy, according to a 2020 report from the National Association of State Mental Health Program Directors. Once jailed, people with mental illness are incarcerated twice as long as other defendants, the report said, and few receive treatment for their condition.

For some people accused of a misdemeanor, the wait for what’s known as inpatient competency restoration can be longer than if the individual had been tried, convicted, and sentenced under such charges, said Dr. Robert Trestman, chair of the American Psychiatric Association’s Council on Healthcare Systems and Financing.

The delays in transfers to inpatient treatment facilities, state officials say, have increased during the pandemic, amid worsening shortages of state hospital staff. Yet several legal cases — including those in Alabama, Colorado, Oregon, and Washington state — were filed years before covid-19 surfaced.

In Georgia, the state mental health agency said it has had a net loss of almost a third of its psychiatric hospital staffers since January 2020. Temporary workers are filling some vacancies, but the state reports several unfilled jobs for the forensic psychologists tasked with evaluating the competency of people in custody.

Beau Hampton has a history of psychiatric care beginning at age 3, including multiple hospitalizations, according to court documents. He is described as having autism, bipolar disorder, and other mental health diagnoses.

In March, while in custody at the Walton County Jail, Hampton was wounded in a fight and required stitches. He also faced a pending felony assault and a misdemeanor battery charge in a nearby county.

But state officials said Hampton didn’t rise to the top of the waitlist for inpatient treatment despite the court order, his age, his diagnoses, and his difficulties in jail. The list is based on the date of someone’s court order for hospitalization and the patient’s condition.

The average wait for a male inmate who needs such care in Georgia is 10 months, state officials said at a court hearing on Hampton’s case in April. The judge, Cheveda McCamy, gave the state 21 days under the contempt order to get Hampton placed in a hospital.

Hampton could not be reached for comment. The public defender assigned to his case, Julia Holley, said the competency questions — and not his actual criminal charges — consumed much of her time. Because of Hampton’s age and condition, and his being in the foster care system, she said, the case has “broken my heart the most.” She added, “He deserves a chance.”

Jails like Walton County’s are feeling the burden of caring for people who have mental illnesses. Such inmates often cannot afford bail or bond, said Trestman, and smaller jails have fewer services than big ones. Jails are “not places designed for treatment,” he added. “It’s not a warm and fuzzy environment.”

Incarceration costs are much higher for those with mental illness — about four times as much as for others, said Capt. Terry Mays, administrator of the Wayne County Jail, in southeastern Georgia.

In southwestern Georgia, Capt. Steven Jones, acting administrator of the Thomas County Jail, said one man waited more than a year for such a placement. During that time, Jones said, the man tried to kill himself by jumping from a railing, breaking both ankles and damaging his spine. The delay for the psychiatric hospital bed “was ridiculously long,” Jones said.

Especially for misdemeanor offenses, experts said, getting treatment more quickly in a community setting may make sense. And several states are moving to increase outpatient treatment.

He cited the 1999 Supreme Court ruling in Olmstead v. L.C., a groundbreaking decision that supported the least-restrictive level of care for people with disabilities. “That can be a group home, that can be a supervised living arrangement, it could be independent living,” Gowensmith said.

South Carolina passed legislation this year that will allow both outpatient and jail-based restoration options.

Georgia has limited options for outpatient services. Ashley Fielding, assistant commissioner of the state mental health agency, said in a statement that it’s “actively working on solutions” to the competency backlog, citing raises given to all state employees and expansion of nonhospital restoration alternatives.

On the 20th day of the Walton County judge’s contempt order — one day before her deadline — the agency transferred Hampton to a state psychiatric facility in Milledgeville. The state mental health agency declined to comment on the case other than to say it had complied with the judge’s order. More than eight months had passed since Hampton was arrested.

What You Need to Know About Monkeypox