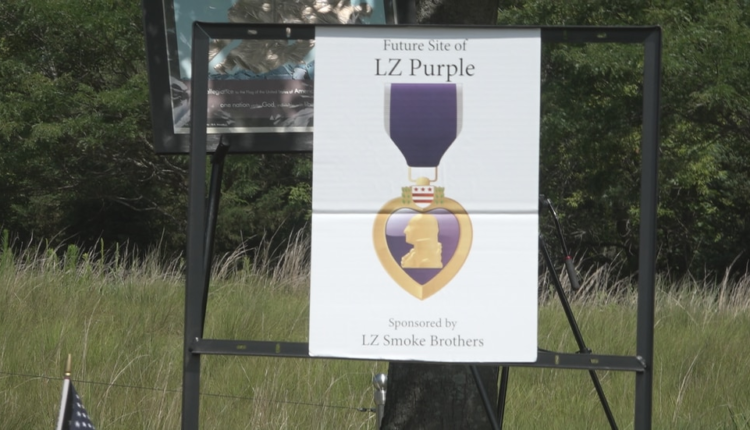 LZ Smoke Brothers is the group behind the Purple Heart Memorial operation, will run parallel to the LZ Peace Memorial in Rockford alongside a bike path. The name comes from the purple hearts which are given to soldiers who were wounded during war time, or their families if they died in service.

“I was laying in a hospital bed, I had malaria after the wound. They just came up and pinned a purple heart on my pajamas. I didn’t know anything about anything really,” said Stephen Spencer, an army veteran who served in 1967 in the Vietnam War.

Herbert Bolding and Stephen Spencer received hearts after both being wounded during battle. Bolding recalls the heart-wrenching moment when he was shot in the neck; Not wanting to remember those memories any further because of the grief it brings him.

Spencer explains the experience, like he is still living in the memory. While in Cambodia, he and his team were stuck in a cross fire after former President Nixon gave the green light. He says a rocket was shot in his teams direction and struck him in the knee, the injury putting him in the hospital.

Both men relaying those physical and emotional wounds, could be seen with pain of the past dancing in their eyes. Memories that evidently take them back to darker times in their early lives. When the two were asked about what it was like to receive the purple heart awards, their trauma spoke for them.

“Absolutely not. There’s fellas that are on the wall behind us are the ones that deserved the purple heart,” said Spencer.

Bolding and Spencer both admit to feelings of honor and gratitude for the recognition the new memorial will bring.

The man running the bulldozer, Donald “Ramrod” Cash says he wished he could be a part of this moment.

While 100 men were picked to be drafted in the war, Cash missed the draft by just a few individuals, drawing number 104. That’s why he strives to help out in any way he can.

“I felt I kind of missed out, not that I wanted to be there but maybe felt a little guilt,” said Cash.

“It’s an honor to serve your country and service no matter what the cost is,” said Spencer.

“Remember what we had to go through,” Bolding said.

August 7 is Purple Heart Day and LZ Smoke Brothers will be hosting a dedication on that day at the new memorial site. The memorial is scheduled to be completed with the purple heart mosaic sometime in September.