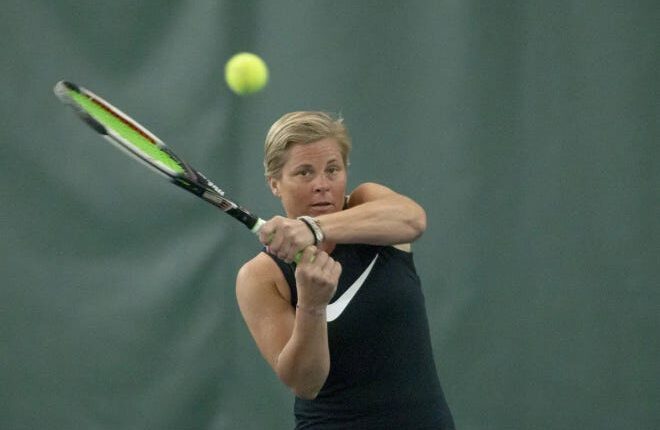 Jen Lassandro switched (mostly) to pickleball two years ago, but Northern Illinois University just reminded everyone how good she was at tennis.

Lassandro, who has lived in Rockford for the last 25 years, was named Monday as one of the 50 greatest women athletes at NIU as part of the school’s 50-year celebration of Title IX.

“It is so special to me,” said Lassandro, the former Jenny Karges, who was the two-time Mid-Continent Conference champion at NIU, the only conference champ in NIU tennis history. “I worked so hard at it. I played tennis since I was age 7. My dad was my coach mainly. It feels good to be recognized and appreciated. It feels really special.

“Tennis is always going to be there for me. It’s always my love. Pickleball is a passion too, but my love has always been on the tennis court. All the travel I went through and all the tournaments and how well I did at NIU; it just makes it sweeter that I’ve been recognized for it. I will never stop playing.”

Lassandro took 15 years off from tennis when she first got married, moved to Rockford and had four kids. But she doesn’t do things in half measures. When she began playing again, she played an average of four hours, almost every day, usually against two or three different players. In 2019, she went to the USTA Clay Court Championships in Houston in the Women’s 45-and-over division.

She still plays tennis two or three times a week — in the summer, at least — but has become more devoted to pickleball, which gives her more opportunities to compete. She was talked into giving the sport a try by Neil Mediratta, one of her closest tennis friends.

“Neil saw somebody playing at NIU and said, ‘Hey, do you want to try it.’ I said, ‘That’s for old people,’ but I started really loving it,” Lassandro said. “I could compete more at pickleball because there were more tournaments. There are not many tennis tournaments for people my age.”

More:How this 72-year-old Rockford native became a star in the unique sport of pickleball

Lassandro says she plays pickleball “every single day.” She played in a per tournament in New York last month and was supposed to play in California last week but pulled out for family reasons. She is leaving Sunday for a per tournament in Kalamazoo, Michigan, and in August plans to enter the Chicago Open in Highland Park and a tourney in Newport Beach, California.

Her old tennis strength is also her best shot in pickleball: the two-handed backhand.

“A lot of the pickleball players who aren’t tennis players struggling with that,” she said. “It is not natural to them. I can roll it and put topspin on it and also drive the ball. When I play opponents who don’t know me, they automatically go to your backhand. I am like, ‘Yeah, go to my backhand.’ They quickly learn, ‘I can’t go to your backhand.’ ”.

Lassandro found out about her honor when she received “a big envelope” in the mail from NIU on Monday. All 50 NIU women athletes on its list will be honored Oct. 6-9 during Homecoming week.

The honor means even more to Lassandro because she has remained close to NIU through the years.

“I still go to DeKalb. I play with some of the graduate students there,” she said. “I play with the men’s coach, Patrick Fisher. NIU means a lot to me. I even came out to a practice once just to give the women’s team input from an experienced player who played at NIU. It’s nice to still have a connection there.

“I was really surprised. I am modest, but something like this, I am super excited. I hurried up and called my kids. This is really special to me.”