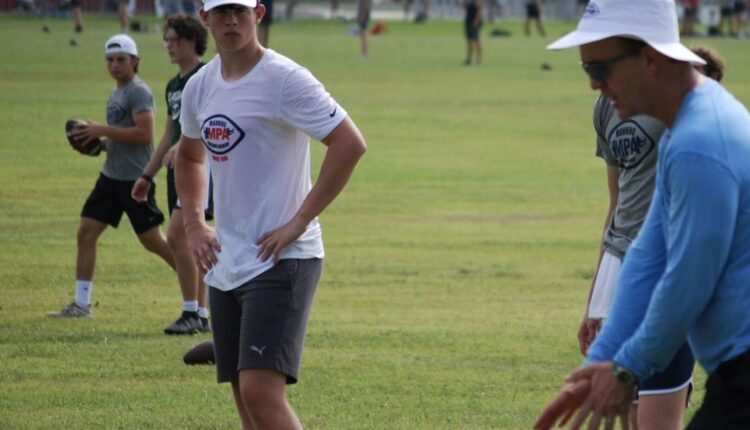 MAHOMET — A lot has changed for Wyatt Bohm during his time playing football at Mahomet-Seymour High School.

Both individually and with the Bulldogs as a whole.

Bohm had little effect with the MS varsity program as a freshman in 2019. He carried the ball twice for a net loss of 11 yards as a sophomore during the condensed spring 2021 season.

Now he’s a standout quarterback with MS after throwing for 3,171 yards, 27 touchdowns and completing 59 percent of his passes as a junior last fall.

The rest of the Bulldogs also experienced major gains in this timeline, under the direction of Jon Adkins following his 2019 hiring.

The program finished 4-5 in Bohm’s freshman season, 3-3 in the condensed 2021 spring campaign and a robust 11-1 with a Class 5A postseason quarterfinals berth last fall.

So what is Bohm doing to push MS to even greater heights?

Learning from an NFL Hall of Fame quarterback, for one.

“It’s crazy. I didn’t think I’d be getting coached by Peyton Manning at the end of my junior year,” Bohm said earlier this week after returning from the Manning Passing Academy in Louisiana. “To be able to learn from him and take what he says and add it to your game and your mechanics is a really good experience.”

That’s far from the only camp Bohm participated in during June.

The 6-foot-4, 215-pound playcaller’s other stops happened at Lindenwood University in St. Charles, Mo., Iowa State, Southern Illinois, the University of Indianapolis, Illinois and Western Illinois, with the last of those happening Tuesday in Macomb .

He also was slated to attend a camp hosted by Northwestern but opted out to rest his right arm.

“I went to camps before my junior year, and you’d have to go up and introduce yourself (to coaches),” Bohm said. “After last year, coaches look at your film. They know who you are. It’s nice having that.”

“You want to get the recruitment stuff over with so you can worry about the high school season,” Bohm said. “(I’m) just really trying to go to the camps I feel will benefit me the most — where I’d want to go play football.”

Obviously, the Manning Passing Academy is an exception.

“My grandpa had seen something about it, and he was just talking to me about it and asked me if I would be interested,” Bohm said. Bohm’s grandfather, Randy, previously was a quarterback at Taylor University in Upland, Ind.

“He ended up paying for me to go, which obviously is a huge blessing,” Bohm continued. “He really loves watching any sports that his grandkids play, but he enjoys watching me especially since we play the same position.”

Bohm and his father, Champaign County Circuit Court judge Jason Bohm, made the 12-hour drive south to Louisiana. The younger Bohm took part in two practices per day and played some 7-on-7 ball, during which Bohm also served as a receiver and defensive back.

“It shows you how different states are in the competition level and skill level,” Bohm said. “I also got to do drills with a lot of really good college quarterbacks, college coaches, former NFL quarterbacks.”

Among Bohm’s tutors was Aidan O’Connell, a sixth-year quarterback at Purdue. O’Connell threw for 3,712 yards, 27 touchdowns and 11 interceptions last season for the Boilermakers. O’Connell stands 6-3 and 210 pounds, making him an ideal teacher for the similarly sized Bohm.

“I was one of the biggest kids down there. They stressed to me using that to my advantage because it is an advantage,” Bohm said. “Just being able to use that to see, to get more power, more accuracy. … It’s good to hear from people that have not the same experiences but the same kind of advantages — tall quarterbacks that know what they’re talking about.

“And, obviously, you’re going to listen to Peyton Manning.”

Bohm is among several returning MS football players who seeks to play the sport at the collegiate level. Among the teammates who have attended camps this summer with Bohm are senior linebacker Nick Golden, junior running back Luke Johnson and sophomore quarterback Luke Dyer.

Bohm shared via Twitter a picture of himself with Johnson and Dyer on at Memorial Stadium in Champaign on June 16. Bohm also posted an image of himself inside Southern Illinois’ Saluki Stadium on June 10, with a caption indicating he “won the accuracy challenge” for quarterbacks.

“It’s really cool to see the extra work guys are putting in,” Bohm said. “That rubs off. You see freshmen and sophomores going to the field, throwing by themselves when coaches aren’t telling them to. I think that’s really what Coach Adkins wanted to build was that culture.”

With all of those camps in his rear-view mirror, Bohm now is looking toward his final season with the Bulldogs. And trying to guide them to a state final for the first time since the 1977 MS squad won the Class 2A championship.

The Bulldogs’ new season begins Aug. 26, when they host a Morton team that knocked them out of the Class 5A playoffs last year.

“Our goal is to win the state. It’s not to make it to the quarterfinals,” Bohm said. “Once the season starts with practice, I try to worry about wins. In the end, colleges recruit winners. That’s all we’re trying to focus on.”

Rockford celebrates 30th Anniversary of ‘A League of Their Own’