Recapping Virginia’s Athletic Achievements in the ACC in 2021-2022 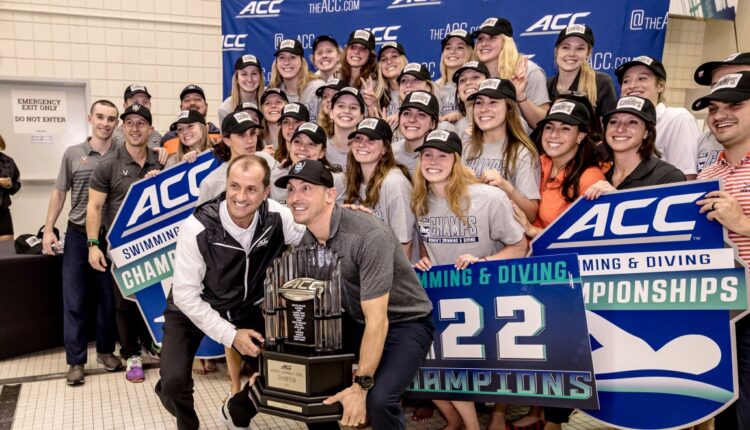 The 2021-2022 Virginia athletics year comes to an end this weekend with nine UVA athletes competing in the 2022 NCAA Track & Field Championships, the final collegiate sporting event for the Cavaliers this season. With ACC competition wrapped up in each of Virginia’s 25 NCAA sports, let’s take a look at how each of UVA’s teams fared in the Atlantic Coast Conference in 2021-2022.

In the ACC Cross Country Championships, the men’s team finished eighth in the field. Rohann Asfaw finished 13th in a field of 135 runners as the fastest individual runner for the Cavaliers. Jacob Hunter and Derek Johnson also finished in the top 50 on the individual leaderboard.

The women’s team finished in tenth place in the ACC Championship 6k race. Freshman Margot Appleton finished 31st in the race out of 138 total runners to lead the way for her team.

Virginia’s field hockey team finished fifth in the ACC during the regular season with a 3-3 conference record. In the ACC Championship, the Cavaliers beat Boston College in the quarterfinals and then managed to upset No. 1 seed Louisville to advance to the title game, but they fell to the third-seeded North Carolina Tar Heels by a score of 1-0.

Virginia’s 4-4 record in conference play was good for a fourth place finish in the ACC Coastal after ending the season and the Bronco Mendenhall era on a four-game losing streak, including a pair of tough loses to Coastal rivals Pitt and Virginia Tech.

The men’s soccer team placed sixth in the ACC Coastal division with two conference wins on the season and seven total points. As the No. 11 seed in the ACC Tournament, the Cavaliers fell to Wake Forest in the first round. The ACC had eight teams get bids to the NCAA Tournament, the most of any conference, and three of those teams advanced to the Elite Eight, so it was a highly competitive conference.

The Virginia women’s soccer team went undefeated in ACC play, capturing the program’s third ACC regular season championship. UVA earned the No. 1 seed in the ACC Championship, but fell in the title game to No. 2 Florida State, who went on to win the National Championship a few weeks later.

Virginia racked up the ACC honors with Diana Ordoñez winning ACC Offensive Player of the Year and head coach Steve Swanson getting the nod as the conference’s Coach of the Year. Lia Godfrey was a First Team member along with Ordoñez. The Cavaliers added three Second Team members in Samar Guidry, Laurel Ivory, and Alexa Spaanstra as well as two Third Team members in Haley Hopkins and Taryn Torres.

Virginia volleyball finished 15th in the ACC in the first season under head coach Shannon Wells after the team cut its previous season short.

Brooklyn Borum delivered a fantastic first-year campaign and was named to the ACC’s All-Freshman Team. Borum is the first Cavalier to earn any ACC award since Sarah Billiard made the All-Freshman Team in 2017.

Virginia finished the regular season sixth in the ACC standings after going 12-8 in conference play. The Cavaliers held off Louisville in the second round, but UVA fell to North Carolina in the quarterfinals of the ACC Men’s Basketball Tournament in Brooklyn.

Jayden Gardner was recognized as a member of All-ACC Third Team and Kihei Clark and Reece Beekman both received honorable mentions. Beekman also came in second for ACC Defensive Player of the Year and was therefore a member of the All-ACC Defensive Team.

The women’s basketball team finished 14th in the ACC standings after winning two out of its last three games of the season, notching victories over Duke and Pittsburgh. In the ACC Tournament, the Cavaliers fell to Wake Forest in the first round.

Alex Walsh was named the ACC Women’s Most Valuable Swimmer after winning three individual events and three relays, two of which set American records. The Cavaliers also won all five relays at the meet.

The men’s indoor track team placed tenth at the ACC Championships. Owayne Owens won the triple jump for the second year in a row and Wes Porter finished second in the mile as two highlights for the Cavaliers.

The women’s team managed a fifth place finish in the ACC Indoor Track Championships. Maria Deaviz earned a personal best in shot put that also gave her a first place finish, and Jada Seaman placed third in the 200-meter race.

The Virginia wrestling team went 1-4 in conference duals during the regular season. The ACC Championships were held in Charlottesville at John Paul Jones Arena and the Cavaliers finished fifth, matching the seed the team had entering the tournament.

Justin McCoy earned All-ACC honors in the 165-pound weight class by finishing second, one of six UVA wrestlers who placed during the event. Eight Cavaliers locked up automatic bids to the NCAA Championships by virtue of their performances at the ACC Wrestling Championships.

After a hot start, UVA endured a drop-off in the second half of the season, losing four of its last six ACC series and finishing the season 17-13 in ACC play. Virginia ended up third in the ACC Coastal standings.

After earning the fifth seed in the ACC tournament, the Cavaliers fell to Florida State and Notre Dame and therefore were unable to advance to the semifinal round out of pool play.

Jake Gelof and Alex Tappen earned First-Team All-ACC honors after anchoring the Cavalier offense all season, as both players eclipsed the 70 RBI mark. Pitcher Brian Gursky made Second Team and Griff O’Ferrall and Casey Saucke were members of the ACC All-Freshman team after impressive seasons in the first spring in Charlottesville.

At the ACC Men’s Golf Championship, the Cavaliers placed seventh overall after finishing ten under par as a team. UVA finished above Virginia Tech (11th) in the team leaderboards, so the Cavaliers earned a point in the Commonwealth Clash.

The women’s team was seeded fourth entering the ACC Championship and the Cavaliers made it to the semifinals of match play before falling to the eventual ACC champion, Wake Forest.

Jennifer Cleary and Amanda Sambach made the 15-member all-conference team.

With the exception of a loss at Duke, the Cavaliers dominated the ACC this season, turning in a 5-1 record and capturing their 19th ACC Championship and second in the last four years.

Virginia nearly swept the ACC annual awards. Cole Kastner won Defensive Player of the Year, goalie Matthew Nunes won Freshman of the Year, and Lars Tiffany was named the Coach of the Year.

Virginia finished sixth in the ACC during the regular season after going 3-5 in the conference and holding a 10-10 record overall. While a .500 record isn’t considered amazing, Virginia finished the season ranked No. 16 in the Inside Lacrosse national poll because of the strength of schedule involved in the ACC.

In the ACC Championship, the Cavaliers managed to upset the No. 3 seed Syracuse 18-14 in the quarterfinals. However, the team fell in the semifinals to Boston College, who ended the season as the runner-up for both the ACC and NCAA Championship.

Rachel Clark was honored as the Freshman of the Year in the ACC and also made the All-ACC Second-Team and the All-Freshman team after scoring 60 goals in her first collegiate season. Her teammate Ashlyn McGovern made First Team and Aubrey Williams also made Second Team with Clark. Finally, Abby Manalang and Kate Miller received All-Freshman team honors.

Virginia continued its absolute dominance in the ACC rowing scene by winning its 12th consecutive ACC Championship (and 20th in the last 21 years) after winning four of the five Grand Finals.

UVA softball finished sixth in the ACC after winning 13 games in conference play, the most in a season since 2010. In the ACC Championship, the Cavaliers fell short against Florida State in the quarterfinals, falling 5-3.

Third baseman Sarah Coon was a member of the All-Freshman Team in the ACC.

Virginia men’s tennis ended the season on a tear, winning the last 23 games. The Cavaliers went a perfect 12-0 in the ACC, clinching a second-consecutive regular season title. UVA went on to win back-to-back ACC Tournament Championships, coming from behind to beat North Carolina 4-3 in the title match. Ryan Goetz was named the MVP of the ACC Championship. The Cavaliers then advanced in NCAAs to Champaign, Illinois and won their fifth national championship.

For the third season in a row, a Virginia player was named ACC Men’s Tennis Player of the Year as Inaki Montes carried the torch from Carl Söderlund, who won the award in 2019 and 2021. Andres Pedroso was named the ACC Coach of the Year for the third-consecutive season he won his first national title as UVA head coach.

Montes and Chris Rodesch earned First-Team All-ACC honors, while Ryan Goetz and Jeffrey von der Schulenburg were named to the Second Team and Gianni Ross was selected to the Third Team.

Recording a 10-3 record in ACC play, the UVA women’s tennis team finished in a three-way tie for third place in the conference standings. Virginia earned the No. 4 seed in the ACC Championship, where the Cavaliers beat NC State before pulling a massive upset over No. 1 North Carolina 4-2 in the semis behind wins from Emma Navarro, Sara Ziodato, and Natasha Subhash. In a hard-fought championship match, UVA fell to Duke to end the run.

Emma Navarro became the first player in UVA history to be named the ACC Women’s Tennis Player of the Year. Navarro earned First-Team All-ACC honors and teammates Natasha Subhash and Elaine Chervinsky were named to the All-ACC Second Team and Third Team, respectively.

The women’s outdoor track team finished seventh at the ACC championships. Maria Deaviz won gold in shot put for the Cavaliers, and Mia Barnett set a facility record in the prelims of the women’s 1,500 meters.