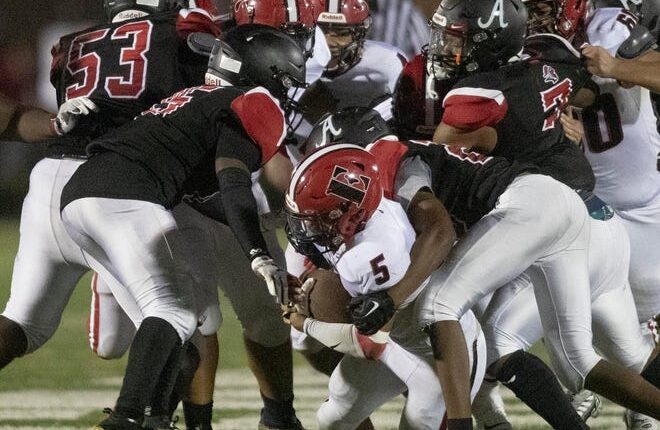 ROCKFORD — The simplest play in football also has one of the highest success rates. Yet it’s seldom called.

The E-Rabs have the two most dynamic running backs in the NIC-10, yet Javius ​​Catlin and Deterrace Dotson spent much of Friday night pushing rather than running. Pushing quarterback Mahki Mathews.

East didn’t beat Auburn 22-14 as much as the E-Rabs snuck past Auburn. With quarterback sneakers. A boat load of them.

“We would run it 25 plays in a row if we could,” East coach Gary Griffin said.

Mathews ran 17 times for 76 yards, most of them on quarterback sneakers. His only carry for less than 2 yards was a 1-yard TD run. He also had a 3-yard TD sneak.

“I usually don’t get the ball,” Mathews said. “It feels really good to run the ball, I’m not going to lie, really good.”

Ten of Mathews’ 17 carries went for first downs, almost all of them on sneaks.

“We saw their linebacker kept playing back, so we kept running,” Dotson said. “And I enjoy pushing. We were pushing them 5 or 6 yards every play. I think we’re going to run that throughout the season even more. That’s a good play.

“That’s not even one of our plays. We just saw them playing back. Our coaches adjusted, and we started running it. That’s very fun and very exciting to block for my quarterback and push him 5 yards without him even running. We were pushing him off his feet.”

On many of those plays, Mathews was lost in a crowd. It looked more like rugby than football, with his running backs charging up from behind to shove him in the back — and keep the pile moving forward.

“My fullback was pushing me, my linemen were pushing me, they were destroying them up front,” Mathews said. “I was getting easy yards.”

Mathews’ 1-yard sneak broke a 6-all tie and gave East a 14-6 lead 14 seconds before the half. But even 14 seconds almost gave Auburn (1-3) enough time. Anthony Purifoy threw a 32-yard pass to Alvino Vela to get Auburn inside the East 20 before time ran out.

“You can only do what the defense gives you. Why get cute?” Griffin said. “Guys don’t understand that. And I don’t understand why guys are like that. We’re going to do whatever works for us, keeps the clock moving, keeps the chains moving and keeps them off the field. They are one of the most explosive teams in this area. There is no way on the planet we want to give them the ball on offense. We tried to hold it as long as we could.”

The E-Rabs were sneaking so well they even called it once on 2nd-and-15. Mathews was held to 5 yards on the play.

Still, it worked so well that East controlled the ball virtually the entire game. Auburn had four plays that gained at least 32 yards. East topped that with two drives that didn’t score any points but each ran more than 8 minutes off the clock. And Mathews won it with a 3-yard sneak to break a 14-14 tie with 3:34 to play.

“He’s real confident in what he is doing,” Catlin said. “That’s what I like about him. He’s a real confident quarterback. Hey executes. He never shows any type of emotion. Hey just executes. That’s why he kept getting all of those runs. He was calm and confident with it and got all those yards.”

The quarterback sneak can look like the most boring play in football. But not the way East runs it.

“It’s extremely fun,” said Mathews, who hopes to keep running it. “If it ain’t broke, don’t fix it.”