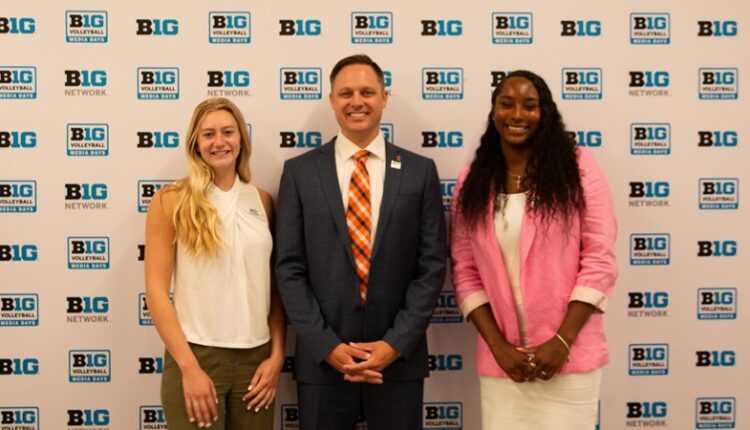 The Illini participated in the second day of festivities alongside six other conference schools, including reigning Big Ten and national champion Wisconsin. After finishing 22-12 overall and 12-8 in conference action, Illinois heads into 2022 with high expectations following an NCAA Sweet 16 appearance last year.

With Illini student-athletes returning to campus soon ahead of the start of practices on August 9, let’s take a look at a few of the biggest takeaways and talking points from Illinois’ inaugural media days experience.

Though the NCAA has implemented rules allowing players to more easily transfer without having to sit out for entire seasons, Illinois has focused more on bringing in talent through high school recruiting than via the transfer portal.

The Illini roster may have lost Megan Cooney, Taylor Kuper, and Kylie Bruder, but Tamas has brought in several new faces to Champaign. Illinois welcomes four newcomers, three of which are incoming freshmen: setter Bianca May, middle blocker Cari Bohm, and outside hitter Sophie Stephenson. The fourth player is a transfer, sophomore outside/opposite hitter Kayla Burbage, who joins Illinois after leaving Missouri.

Burbage started 24 of the Tigers’ 28 matches as a freshman, leading the team in total blocks while ranking third with 211 kills.

“We’ve had a transfer every year. I think one every year to be exact and that’s going to happen,” Tamas said. “But overall I’m pretty big on loyalty. I’m not looking to make the transfer portal a big priority moving forward. But for those players that are out there, maybe didn’t find a great fit the first time around, we feel like we’ve created a good culture and we’ve had a good thing going and we’re happy to accept anyone that wants to be with us.”

High school recruitment is expanding to outside the Midwest

As a Big Ten institution, Illinois has firmly established itself as a dynamic recruiter in the Midwest. Out of the 16 players on this season roster, 13 hail from that region, while five are from the state of Illinois.

Though creating and maintaining a recruiting pipeline in Illinois and the Midwest is important to annually competing and contending in the Big Ten, Tamas notes the need to look for talent everywhere when playing in the strongest conference in the country.

“Most of our rosters will look fairly regionalized. I think that’s pretty standard across the country,” Tamas said. “You’re always looking to bring in the best, no matter where they come from, and I’m proud that we have great players from the region.”

The Illini are also represented by three players from outside the Midwest: Stephenson is from Seattle, Washington, while Burbage, a fellow newcomer, hails from North Carolina. A true sign of evolving and expanding recruitment that Tamas and his staff are pushing for comes in the form of sophomore defensive specialist/libero Becca Sakoda, who is from Hawaii.

“We’re trying to be one of the best teams in the best conference,” Tamas said. “You can have a look anywhere and everywhere and try to promote that and to get players from all over who want to be here and want to be part of something special.”

Unlike other teams in the Big Ten and across the country who may have played several matches throughout the spring, the Illini were not as fortunate. Due to various health and illness-related cancellations, Illinois was not able to participate in many originally scheduled events.

Collins is not especially concerned with the limited spring matches, especially given the amount of talent and experience that the team is returning this season.

“I think our team is in a good spot this summer,” Collins said. “I think we still play like we did have that competition this spring and summer. It’s really exciting to see us work hard every day and prepare for the season. So I think we’re in a good spot.”

Though two of last season’s starters – Cooney and Kuper – have graduated and are no longer doing the orange and blue, Illinois is in a good spot. Brown, Collins, seniors outside/right side hitter Jessica Nunge and middle blocker Kyla Swanson, junior outside hitter Raina Terry, and sophomore libero/defensive specialist Caroline Barnes all played over 100 sets for the Illini and will be back this year.

Through eight conference matches last year, the Illini sat 4-4, though five of those matches came against ranked opposition.

Aside from a five-set win at No. 4 Purdue, Illinois needed to build some momentum as it sought a return to the postseason. And that’s exactly what the Illini did.

One important stretch came at the end of October when Illinois traveled east for a two-match stretch at Rutgers and Penn State on back-to-back days. Though the Scarlet Knights did not win a conference match last season, they pushed the Illini to five sets. One day later, Illinois walked into No. 13 Penn State’s gym and pulled out a four-set victory.

“That’s just a part of what the conference is. And so you really just — it teaches us, coaches and players, how to just kind of take everything for what it’s worth. Cherish those victories, making sure you’re really celebrating every victory you have, and continually learn from the win or the loss.”

This speaks to the strength of the Big Ten, Tamas says, as eight conference teams earned berths in the NCAA tournament, and the national championship match featured two Big Ten teams: Wisconsin and Nebraska.

“We made it to the tournament, and safe to say nobody wants to see us in the tournament,” Tamas said. “Playing in this conference prepares you for just about anything. And I think you’ve seen it not only with us but you’ve had six teams in the Sweet 16, four teams in the Elite Eight, two teams in the Final Four for the last six or seven years.

“I think the record speaks for themselves, but we’re happy to be part of that. We just want to do it one day at a time. And we want to finish better than we started every single season. I’m proud to say we’ve done that for the majority of the seasons that we’ve had.”

Nearly 1.2 million viewers tuned in to watch the NCAA tournament championship match between Nebraska and Wisconsin, a signal of the growth and appreciation of volleyball in the United States.

That sentiment is also seen within the Big Ten. Along with the inaugural Media Days, the first in-person preseason media event for the sport, the conference announced a groundbreaking new broadcasting partnership with Volleyball World. A record 55 volleyball matches will also be televised in the US in 2022, including six Illini matches.

“I think I always kind of find myself comparing to men’s basketball and football, and it’s pretty obvious that they make a lot of profit,” Brown said. “But I want to be the ones that people compare to. We want to compare to women’s volleyball. And not just women’s, but men’s, too.

“I think it’s important to be an ally to our men’s side of the sport. I don’t really have a specific example, but I want to be the ones that people are looking toward.”

The Illini begin practices on August 9 before opening the season on August 26 against Georgia Tech at Ole Miss Classic in Oxford, Mississippi.