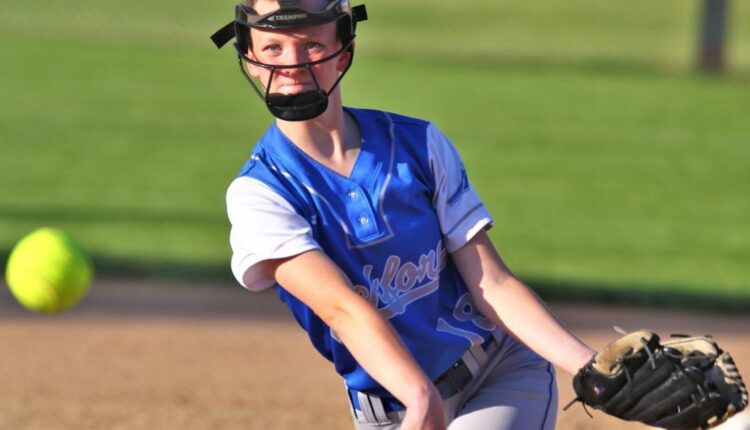 In a black and white comparison, the vibes McKinnley Hoffman picked up about Rockford’s softball team from last summer to this summer are vastly different.

“There’s less cliques,” the junior infielder said. “Making everyone feel a part of the team.”

With five seniors that have graduated, including all-conference player Gabby Keith, Hoffman wanted the 2022 Warriors team to be more inclusive and have better vibes.

After three combined wins over the last two years and back-to-back last place finishes in the Top of Iowa East, Rockford has doubled its win total to six and have three conference wins, the most since the 2019 season.

“We knew we had some potential,” Warriors head coach Makaela Hoffman said. “We had to find the right people to put in the right spots. We knew from the beginning we had to (improve) the attitude and mindset.”

Coach Hoffman echoed her daughter’s call for team inclusivity and had her plus seniors Chloe Rooney, Avery Groven, Madelynn Muller and Elsie Carroll, lead what they call “Squads.”

Those five are the squad leaders and each squad has a mixture of sophomores, freshmen and eighth graders. They warm up together and do other activities.

“Bonding activities like water balloon fights and kayaking,” Groven said. “Those are fun.”

There’s a lot of eighth graders on Rockford this summer.

Two of the most impactful have been Hannah Hillman and Danika deBuhr. The latter ripped three hits on Monday night, including a bases clearing double to drive in five total runs, and the former leads his offense in RBIs with 17.

Seven other eighth graders have made at least an appearance in a game.

“They were all willing to learn and adjust and try new spots they haven’t tried before,” McKinnley said.

“We’ve suited everybody for varsity, we haven’t done that in the past,” Coach Hoffman added. “They’ve got some great athletic ability. The future is bright for them.”

Winning games were a luxury for the warriors for two summers. Even this year, they started 0-2 and easily could’ve spiraled out of control and face another season with under three wins.

Then against North Iowa on May 27, they claimed an 11-7 win sparked by a four-run fifth. They backed that up with a 16-0 victory over Northwood-Kensett four days later.

“I feel like I was expecting the worst, but more came out of it,” McKinnley said. “As soon as we had our third win, we were getting better than last year and we’re not having our moments where we can’t get anything right.”

Even with a four-game skid over the first week in June, Rockford alternated wins and losses over its next four contests and then have won back-to-back games over the same two opponents as the first time in the Bison and Vikings.

It walked off against North Iowa on June 17 and routed Northwood-Kensett 21-1 in a Top of Iowa East contest on Monday in Northwood, powered by a 15-run first inning.

“They knew we could do some things,” Coach Hoffman said. “As long as they stick together and they encourage one another, I think those things have helped us.”

The schedule doesn’t get easier.

Rockford faces returning Class 1A state qualifier North Butler on Tuesday then hosts Newman Catholic, a traditional power in North Iowa, on Wednesday. Then, the Warriors get doubleheaders with a pair of top-11 teams in Class 2A in Central Springs and West Fork.

They get single games against St Ansgar and Osage.

In a hunch, Rockford’s schedule gets loaded with some of the best competition it will face before the 1A regional tournament kicks into high gear. Still, it isn’t shying away from the competition.

Zach Martin is a sports reporter for the Globe Gazette. Reach him via email at [email protected] and follow him on Twitter @zach_martin95.

Sent weekly directly to your inbox!

Trump to stump for Miller at Quincy area rally