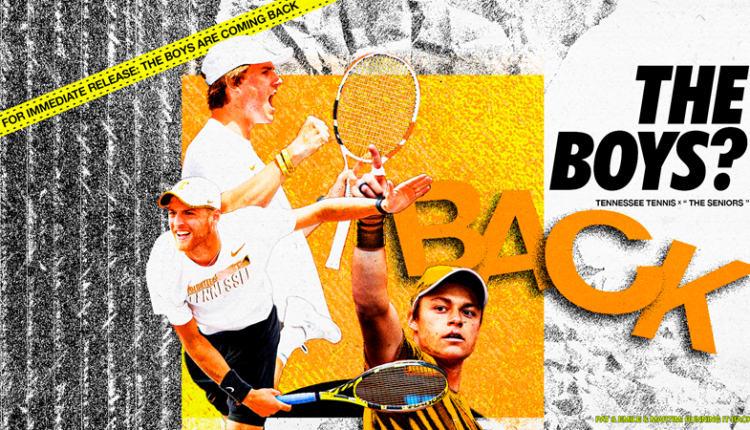 KNOXVILLE, Tenn. – The Tennessee men’s tennis trio of Pat Harper, Emile Hudd and Martim Prata will return to Rocky Top for the 2022-23 season, utilizing their fifth and final year of eligibility as a result of the COVID-19 pandemic.

The trio combined for 97 singles and doubles wins during the 2021-22 season, including 67 combined dual match victories. Harper and Prata have attended Tennessee since the fall of 2018, while Hudd has one year as a Vol under his belt.

Coming off back-to-back NCAA semifinal appearances, Tennessee’s squad will retain much-needed experience as it is poised to make another run in 2023.

In 2021-22 Harper accounted for 18 doubles wins—17 in dual matches—and three singles wins. Playing primarily at the No. 1 doubles spot with fellow Aussie Adam Walton, Harper was named an ITA Doubles All-American with Walton for a second-consecutive season.

The Aussie duo advanced to the NCAA Doubles Round of 16 in Champaign, Illinois, as Harper currently stands at 77 career doubles victories ahead of his final season on Rocky Top.

“The last four years on Rocky Top have been the best years of my life,” Harper said. “It was a no-brainer coming back for one more year. I’m excited to get back to work with the boys. We have unfinished business and I look forward to competing alongside them and for the Vols for one more year.”

Hudd was a reliable force for the Vols as a senior in 2021-22. Logging 30 overall singles wins and 29 doubles wins, including 37 combined victories in dual matches, Hudd spent the majority of his time on court at the No. 3 singles and no. 2 double spots.

“Coming back was an easy decision,” Hudd said. “My first year in Knoxville was a great experience with the coaches and my teammates. We came so close last year and hopefully this year, with the guys coming back and the new guys coming in, we can accomplish all the goals we have.”

For Prata in 2021-22, the Lisbon, Portugal, native upped his career singles win total to 69 with 11 wins this past season. He also tallied on six doubles victories, drawing him closer to the 50-win mark in doubles for his career, with 48.

A highlight of Prata’s senior year was his clinch in Tennessee’s win over Memphis at the ITA Kickoff Weekend to send the Vols to the ITA Indoor National Championships.

“I am very excited and grateful to be able to compete in front of Vol Nation again,” Prata said. “We have accomplished a lot in the past few years, but know the best is yet to come.”