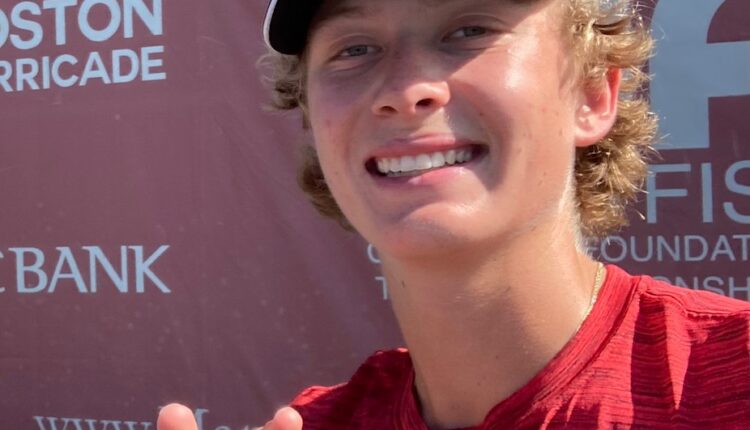 On the day that reigning NCAA singles champion Ben Shelton from the University of Florida announced he was turning pro, another big-hitting teenager from the Southeastern Conference started to make more noises that he wants to be the guy to fill that void in college tennis.

Ethan Quinn is an 18-year-old from Fresno, California and red-shirt freshman at the University of Georgia, who received a wild card entry into the US Open qualifying tournament by virtue of finishing as runner-up at the USTA National Boys’ 18 Championship in Kalamazoo, Michigan. He took advantage of his opportunity and rose to this much bigger occasion by posting a first-round 5-7, 6-4, 6-4 win over No. 175-ranked Ernesto Escobedo of California, who has been ranked as high as No. 67 and played in the main draw of nine Grand Slam tournaments that includes a singles victory over now world No. 1 Daniil Medvedev at the 2017 Australian Open.

“That’s the hammer! That’s the cannon! Unleash the beast” is how former top college player and 1993 French Open doubles champ Luke Jensen described the Quinn forehand while commentating the match for ESPNews. Quinn sets up this superlative groundstroke with his big first serve, which was consistently clocking in the mid-120s while his kick second-serve jumped so high and wide that it had a familiarity to another Georgia Bulldog, all-time great server John Isner.

After losing in the first round of the Orange Bowl junior championships in late 2021, Quinn decided to enroll at the University of Georgia in Athens, Georgia early in January where he trained with the Bulldog team, but not yet competing for the team and retaining his four years of eligibility so he will be able to play the NCAA Championships in Athens in his senior year in 2026. The guidance and mentorship of Bulldog head coach Manny Diaz and associate coach Jamie Hunt, the intense training and the use of the University of Georgia Athletic facilities paid dividends as Quinn progressively improved his results while playing in entry-level ITF World Tennis Tour US Tennis Association Pro Circuit events.

“All the training helped him,” said Diaz. “He has also been very competitive but he most importantly has been very disciplined and motivated. He is always wanting information and processes it very well. He’s like a sponge.”

In April, he earned his first ATP points by reaching the semifinals of the $25,000 ITF event in Bakersfield, Calif., and reached his first pro final at the $15,000 Mardy Fish Children’s Foundation Tennis Championships event in Vero Beach, Florida. In June, he beat the NCAA singles finalist August Holmgren from Denmark and the University of San Diego to win the $15,000 ITF event in San Diego, then in July won the $25,000 event in Champaign, Illinois, beating Ohio State standout Cannon Kingsley and USC Trojan Stefan Dostanic in the semifinals and finals, respectively. He then had his fruitful trip to Kalamazoo, Michigan where he picked up the runner-up trophy in singles, falling a tight four-set final to Learner Tien, and won the doubles title, and a main draw US Open doubles wild card, with partner Nico Godsick. To boot, he earned the event’s prestigious sportsmanship award.

“The biggest thing that has impressed me this summer has been his maturity on the court and his poise and composure,” said Diaz. “He got to Georgia and really stressed how he wanted to have four full years and finish playing the NCAA Championships in Athens his senior year. I think this summer has opened his eyes to the fact that he has an opportunity to play at the highest level and it is our job as coaches to expand our kid’s dreams. That’s what we did with John (Isner) and that’s what we do when we recruit kids. We want them to shoot for the stars and realize that there is a price to be paid. Ethan is paying that price. He has a bright future.”

Quinn went from never having an ATP ranking in April to moving on the cusp of the top 500 at No. 507. He is the No. 4 ranked American teenagers behind Shelton, Zach Svajda and Martin Damm. That ranking will make him one of the top players in collegiate tennis, even before he officially hits a ball for the Georgia Bulldogs.

He has stated that his goal was to gun for Ben Shelton and Georgia’s arch rival Florida Gators for superiority in the SEC and college tennis (as he does here in his post-match interview in Vero Beach here: https://www.youtube. com/watch?v=IvW3Fl1a4jg). However, while that goal will have to be altered with Shelton now jumping to the pros, bringing NCAA team, singles and doubles titles back to Athens, Georgia will certainly be his next long-term targets.

‘An Arm and a Leg’: How to Negotiate for Lower Medical Bills