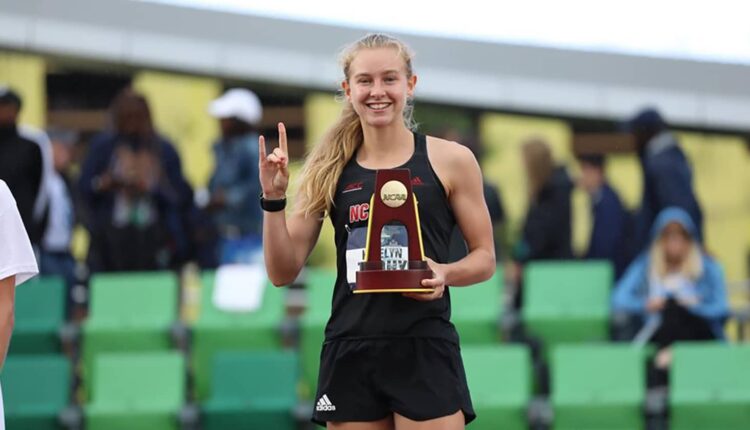 The most recent title was June 11 at the NCAA Outdoor Track and Field Championships in Eugene, Oregon, where sophomore distance runner Katelyn Tuohy of Stony Point, New York, won the 5,000-meter race in a time of 15:18.39. It’s the second consecutive title in that event for a Wolfpack runner.

Last year, 10-time All-American and six-time ACC champion Elly Henes capped her well-decorated career by winning that title, just as her mother and Wolfpack women’s cross country and track and field coach Laurie Henes did during her running career.

“Katelyn didn’t come into college fully healthy and she has worked hard to get there,” Henes says. “Winning the championship was a cool opportunity for her, a great learning experience.”

After missing much of her freshman year due to injury, Tuohy won the 2021 Atlantic Coast Conference title in the 1,500-meter race and finished second in the 5,000 meters. She has now won six All-America awards.

The Wolfpack women’s tennis team spent the entire season ranked in the top 8 nationally and reached as high as No. 2. At the NCAA Championships in Champaign, Illinois, Jaeda Daniel and Nell Miller combined to win the women’s doubles title, the first national championship of any kind in program history.

As a team, the Wolfpack finished with a school-record 26-6 overall mark and a sixth-place finish nationally.

In the Atlantic Coast Conference, women’s cross country won its sixth consecutive championship, men’s swimming and diving won its seventh title in eight years, wrestling won its fourth consecutive title and women’s basketball won the league for the third year in a row.

This weekend, seven members of the Wolfpack running community will participate in the USA Track and Field Championships, a mix of amateur and professional runners looking to earn a trip to the World Athletics Championships, which will be held July 15-24. Both events will be held at Oregon’s Hayward Field in Eugene.

On Sunday, Tuohy and Henes, who have been training together this month in Eugene, will both participate in the 5,000-meter run. Last year, Henes finished sixth in that race, just missing an opportunity to qualify for the 2020 Olympic Games.