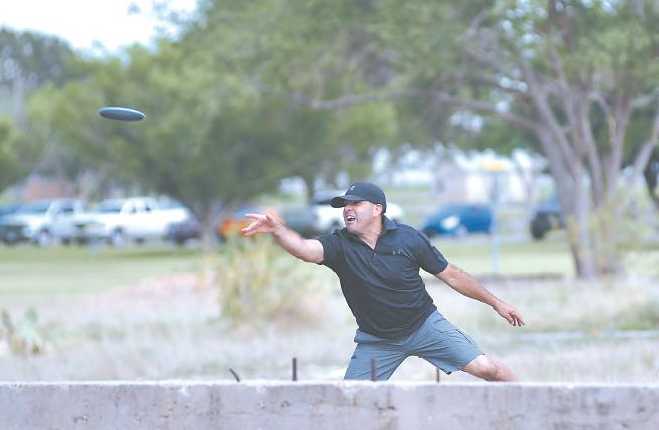 There is a Seinfeld episode where George is deciding between running an errand for Jerry or accepting an invitation to play disc golf in Central Park. Above George’s head, a thought balloon pops up with a frisbee in it; then another thought balloon pops up next to that, and Jerry is in it asking with his comedy routine voice, ‘What’s the deal with airline peanuts?’

George chose ‘frolf’ – which is how disc golf was referred to in that episode – postponing his errand for Jerry until later.

There are 28 members of the Stateline Disc Golf Association and many others throughout Lea County and West Texas who know how George felt, who share his enthusiasm for disc golf. They are caught up in the sport, which boils down to playing golf with frisbees. Disc golfers employ strategy, negotiate tricky holes, pay more than you might expect for the discs, and for the bags in which the discs are stored.

And they have a blast doing all of the above. Early Thursday evening, a group of Stateline Disc Golf Association players were preparing to ‘tee off’ for another round of the SDGA at Harry McAdams Park in Hobbs. And though dark menacing clouds were bearing down, the moods of the golfers couldn’t have been sunnier.

They were about to play golf – more than just a hobby, a passion. Hobbs resident Shane McCaughan, now in his seventh year of playing, says there is much to like about the sport.

“Everything,” McCaughan said before Thursday’s round. “A better question is, what’s not to like? I like coming out with friends, having a fun round, throwing, shaping shots. Our club here, we have a good competition with each other, so every Saturday, every Thursday, you never know who’s going to win, who’s on. So it’s always fun. We like to talk trash to each other, just have a great time with it.”

“For one, it’s free to play, mostly,” said Hobbs resident Josh May, who has been playing for five and a half years. “There are pay-to-play courses, but for the most part it’s free because they’re in park settings. I also love the competition side of it, the mental game. … And then the people. Disc golf is the only sport I’ve seen where you can literally go anywhere to any course and it’s like you know everybody, everyone’s cool. It’s a huge family. If you were at another course, in a place you’ve never been, you meet people, they’re not stand-offish, they’re, ‘Hey, come play with us.’ If you’re not as good of a player, the better players are always trying to help you get better and improve your game. There’s something about disc golf, it’s different.”

The sport itself, though, is similar to regular golf.

“You have basically the same rules,” McCaughan said. “You’ve got ob (out of bounds), you’ve got par-three, par-four. The only difference is, you’re not using a club, you’re swinging a frisbee around. Each disc is different, so you’ve got drivers, fairways, mid-rangers, putters. And they’re all shaped differently, and they fly differently in the air. So it’s kind of a mental game – ‘I’m behind this tree, what am I going to do?’ Or, ‘I’ve got to get this so many feet down the fairway.’ Basically it’s just playing your next shot, really, and trying to make the best score possible.”

“It’s very similar to golf as far as, it obviously takes skill,” May said, “but it takes a lot of mental game – making the right decision, doing the right thing at the right time.”

The course at Harry McAdams is 18 holes with a par of 57. There are three par-four holes; the other 15 are par three. McCaughan said his best round heading into Thursday night was a three-under 54. May said that he has shot in the low-to-mid-40s.

However the golfers shoot, the weather is usually not a hindrance. The mild winters of southeastern New Mexico and West Texas help, but participants will play even on some days that aren’t so mild.

“We’ve been out here in 25-degree weather,” May said. “We’ll play with snow, anything.”

Although there may be some exceptions. “Rain makes it a little harder, obviously, because of grip issues,” May noted, “The wind’s the biggest deal because we get 30-, 40-mile-an-hour winds around here. Throwing frisbees in the wind is tough, but they’re called discs and they’re made to cut the wind a little better than an actual beach frisbee would.”

And then there’s lightning, which was flashing off in the distance as May, McCaughan and their friends were preparing to get started Thursday.

“We as a club decide if we want to play or not,” May said. “But in a tournament, yeah, they’ll cancel for lightning. Or they’ll delay it and give it a chance to pass over.”

When the disc golfers are able to play, they love it and they get good at it. May and his wife Holly often compete in tournaments, up to two per month.

“You have your months where there’s not anything going on,” May said, “but for the most part we try to play one or two a month, all around, just whatever.”

Getting good can lead to big earnings. Roswell resident Mauro Gutierrez, who works in Hobbs on Thursdays and Fridays, was competing in the SDGA on Thursday night, but also preparing for a tournament this week in Peoria, Illinois – the World Masters Super Bowl of Disc Golf – where the winner could earn up to $10,000. Gutierrez had a bag filled with different kinds of discs, and said the whole package was worth about $1,000.

“Yeah, it can cost,” he said. “But when you start progressing, you start buying more expensive stuff.”

For Gutierrez, though, it’s worth it.

Hospital-Acquired Pneumonia Is Killing Patients. Yet There Is a Simple Way to Stop It.