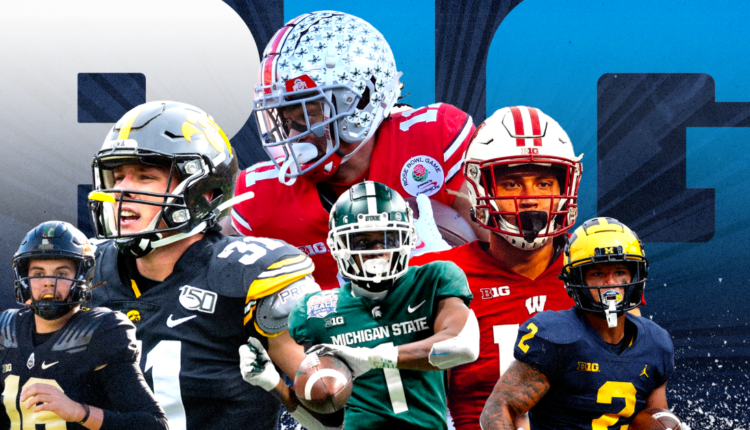 With Ohio State’s gritty win over Notre Dame, the B1G slate for Week 1 was officially wrapped up. It had surprises, disappointments and the just straight odd (see Iowa’s 7-5 win over South Dakota State).

Week 1 provided some fun results, and plenty of conversations to be had before we move on to a Week 2 slate of games. But for now, it’s overreaction Sunday with our updated B1G Power Rankings following Week 1:

The Illini opened the season in Week 0 with a blowout of Wyoming but fell back down to earth against B1G competition in Bloomington. Illinois racked up over 450 yards of offense against Indiana but committed 4 turnovers and gave up the late touchdown after surrendering 75 yards in less than 2 minutes.

Up next: vs Virginia

Nebraska avoided disaster with the win over FCS visitor North Dakota, that’s the good news. The bad news is North Dakota was tied with the Huskers at 7-all heading into halftime, and Nebraska’s old issues surfaced multiple times early on. Nebraska rallied to put the game away, but it was far from a confidence-building performance.

Up next: vs. Georgia Southern

That’s one way to make an entrance to the 2022 season. After a 2-10 mark without a conference win last season, the Hoosiers mounted a late comeback against the Illini in Week 1. The good news? Indiana has found its QB with Connor Bazelak impressing in the win. The defense was also a good sight to see, posting 4 takeaways in the win.

Don’t mess with Greg Schiano in the opening week of the season. That’s the message the Scarlet Knights set with a comeback on the road against Boston College, improving Schiano to 3-0 in season openers since his return to the program. Evan Simon and Gavin Wimsatt split reps under center, and penalty problems do exist (10 for 76 yards), but it’s still a solid win for Rutgers to open the year.

Up next: vs. Wagner

There is big news coming to the upcoming 2022-23 Big Ten football season (and NFL season). Ohio online sports betting will be officially launching on January 1, 2023. Ohio will join other Big Ten states where sports betting has become legalized such as Pennsylvania, Michigan, Illinois and more.

There were some highlights, including Charlie Jones’ debut and Chris Jefferson’s pick-6, but those were overshadowed when it was all said and done. The Boilermakers stalled out too often at times, and Aidan O’Connell completed just 29-of-58 passes in the game. In the end, Purdue will regret letting Thursday’s opener slip through its fingers.

Up next: vs. Indiana State

How much even-year magic does Northwestern possess in 2022? That remains to be seen, but the Wildcats have enough to ramp up the heat on Scott Frost’s hot seat with a comeback win in Dublin. Pat Fitzgerald’s squad looked much better in all facets of the game, including at QB where Ryan Hilinski shined in Ireland.

Up next: vs. Duke

Taulia Tagovailoa failing to throw a touchdown in the first game of the season was a surprise for the Terrapins, but it wasn’t an entirely bad thing. Roman Hemby exploded onto the scene with a pair of touchdowns and 114 yards on just 7 carries while Antwain Littleton II also punched in 2 touchdowns. Jeshaun Jones and Dontay Demus Jr. also played well as they got worked back into game shape in a very successful Week 1 for Maryland.

Up next: at Charlotte

How bad do you have to look in a win to drop 3 spots in these power rankings? Punter Tory Taylor was called on 10 times for 479 yards of punting while the two teams COMBINED for 286 total yards of offense. Oh, and star linebacker Jack Campbell had to address boos from the home crowd directed at the offense. The defense is for real with two safeties on the afternoon, but that offense…

Up next: vs. Iowa State

There’s not a lot to take away from Minnesota’s Week 1 win, other than to say the Gophers looked as expected coming out of the gate. the good news Mohamed Ibrahim made a successful return to the field, and the Gophers look to have a veteran, poised and talented squad in 2022.

Up next: vs Western Illinois

Yeah, there were some issues in the win, including persisting concerns with the offensive line and ground game. Sean Clifford also made some ill-advised throws, including an ugly overthrow that led to a game-changing pick-6. On the other hand, Clifford accounted for all 5 Nittany Lion TDs and Mitchell Tinsley looks like a legitimate threat as a B1G WR. We’ll take it for Week 1.

The Badgers opened up the 2022 season with fireworks and a lot of them! John Torchio scored the season’s first points with an incredible 100-yard pick-6. Braelon Allen also gashed the defense for a 96-yard run, setting the program record for the longest rushing touchdown. If that’s not enough for you, Graham Mertz was efficient and the defense pitched a shutout.

Up next: vs. Washington State

Michigan State was hot-and-cold throughout the season opener against Western Michigan but eventually put things away with a 14-0 run in the fourth quarter. Jalen Berger did look good with 120 rushing yards and a touchdown in the opener. Playing in close games is nothing new for the Spartans, but does make projecting the rest of the season dicey. A bigger concern will be potential injury issues on the defensive side of the ball.

Up next: vs Akron

The QB battle heard round the world rages on with Cade McNamara completing 50% of his passes and JJ McCarthy scoring on his first carry of the season. Outside of the QBs, the defense showed a glimpse of what it can be with the defensive front constantly wreaking havoc in the backfield. But let’s be honest, it all comes back to the QB battle right now, and McCarthy gets his turn as the starter in Week 2.

Up next: vs Hawaii

Don’t look now, but the Buckeyes have the makings of a strong defense this season. Jim Knowles’ unit passed Week 1 with flying colors, limiting the Irish to 76 rushing yards and 2.5 yards per carry. On the other hand, Ohio State’s offense struggled to get going after an early injury to Jaxon Smith-Njigba. In the end, the Buckeyes showed they have a bit of toughness in them, and Ryan Day will likely get the offensive bugs worked out in time.

Up next: vs. Arkansas State