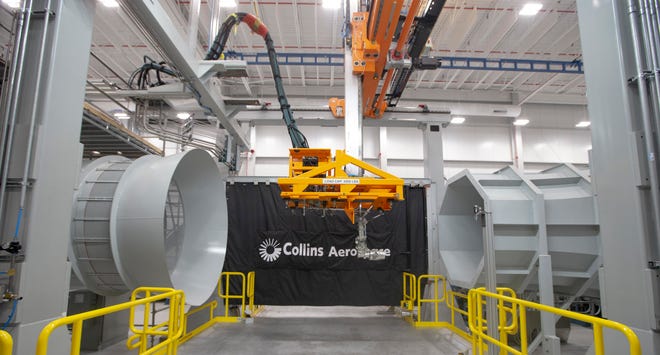 The wind tunnel is designed to streamline Collins’ Ram Air Turbine testing and certification process for the company’s airframer customers.

Ram Air Turbines serve as an emergency power source when an airplane loses hydraulic or electric power in flight. By rotating its small turbine, the system extracts sufficient power from the airstream to enable the pilot to make a safe landing.

To simulate the environment of an in-flight power loss, the wind tunnel will deploy a powerful fan to create a wind speed of up to 170 miles per hour.

“This machine will actually pick that Ram Air Turbine up by itself in an automated fashion and initiate the test without any manual intervention,” Collins Aerospace vice president of Electric Power Systems Eric Cunningham said. “That’s going to help us not only support the delivery of the product, it’s going to help us greatly enhance the safety of our operators who work on these things and obviously help us continue to deliver product for a long time to come for our customers. ”

The wind tunnel is the third such test facility at the company’s Rockford campus, but the first to be built locally in more than 20 years.

Company officials estimate Collins’ Ram Air Turbines have helped save more than 2,400 lives over the past 50 years.

Collins Aerospace is a subsidiary of Raytheon Technologies and bills itself as a leader in technologically advanced solutions for the global aerospace and defense industry.

The company employs 1,940 people in Rockford.

Why are the orange lights on this Peoria, Illinois bridge?