Rockford, Illinois players in contention to make NFL rosters for 2022 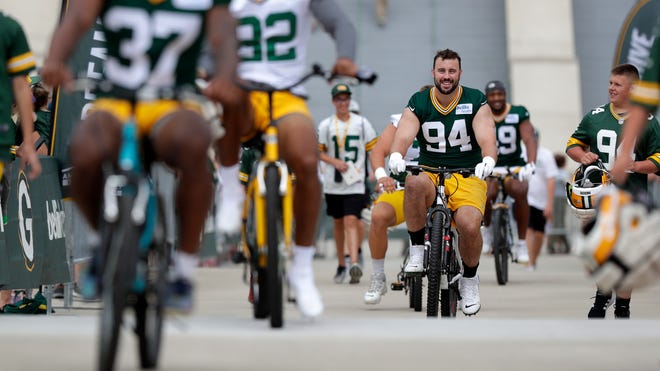 For a while, there were none.

Then for a couple of years, it was just Dean Lowry.

Then James Robinson and Dan Arnold joined in.

Now there are six players from the Rockford area who are in NFL training camps and are battling through the preseason, all of which are looking to make some noise this upcoming regular season.

Let’s meet all six now (listed from the longest-tenured to the rookies), and see where they stand:

Profiles: 6 foot 6, 296-pound defensive lineman in his seventh year in the league

Before the NFL: Lowry played on Boylan’s back-to-back state championship teams and then went on to start on the D-line for Northwestern before his NFL career

Start of career: Lowry has missed only one game in his first six seasons; he ranks No. 2 on the Packers in regular-season games played (96) and No. 7 starts (68) since 2016

So far this year: Though he did not have a tackle in Friday’s 28-24 preseason-opening loss to San Francisco, Lowry is having a strong training camp, and appears good to start building on his impressive streak of playing in all 80 regular-season games since 2017 once this season kicks off.

Profiles: 6-6, 240-pound tight end heading into his sixth year in the NFL

Before the NFL: Arnold was a former Boylan player who went on to start at Wisconsin-Platteville.

Start of career: He is on his fourth team in seven seasons, but the Jaguars are high on him, and they want him to succeed in this offense. He has started 11 games and played in 42 in six seasons, and has 86 catches for 1,123 yards with seven TDs.

So far this year: Jacksonville’s trio of quarterbacks completed 22 passes in Friday’s preseason opener, but none were to Arnold. He is expected to be a big part of the Jags’ passing attack this season, however.

Before the NFL: Robinson became the IHSA’s all-time leading rusher while at Lutheran, and was a star at Illinois State, but was still overlooked in the draft.

Start of career: He burst onto the NFL scene three years ago, setting a record for most rushing yards by an undrafted rookie, and he was the only rookie to average more than 100 yards from scrimmage that season. In 14 games as a rookie he generated 1,414 yards of offense, and last season his numbers dipped a bit as he gained 767 yards on the ground and 222 through the air, scoring eight TDs, all on the ground. He has finished his first two seasons on the sidelines with an injury, last year with a torn Achilles tendon in Week 16.

So far this year: Robinson’s rehab is ahead of schedule and he did not start the season on the PUP (physically unable to perform) list, as expected. He did not play in the preseason opener for Jacksonville (a 24-13 loss to Cleveland on Friday), but he is practicing with the team, and is close to being fully cleared.

Profiles: 6-4, 322-pound offensive lineman in his second year with the Dolphins, and in the NFL.

Before the NFL: Jones played his senior season at East in Rockford, and then went on to eventually stand out at Middle Tennessee State, where he caught the eye of several NFL scouts, including those from Miami.

Start of career: He has been battling to get playing time on Sundays, and is in line to push for just that this season.

So far this year: The Dolphins beat the Bucs 26-24 on Saturday, and Jones was the No. 2 right guard, as he has been the entire preseason. He could move into a starting role this year, and he could be good, soon.

Profiles: 6-6, 320-pound offensive lineman in his first year in the NFL with the Vikings

Before the NFL: As a senior, Lowe helped Auburn to a 10-2 record and a berth into the state quarterfinals, and then he went on to start a school-record 52 games for Illinois, earning Honorable Mention All-Big Ten honors in 2020 and 2021.

Start of career: Lowe was selected No. 184 overall in the sixth round by the Vikings back in the April draft, but they value him so much that he already has $197,872 guaranteed on his contract.

So far this year: He’s listed third on the Vikings depth chart at right tackle, and will get plenty of work this preseason, which means plenty of chances to move up that ladder. The Vikings lost 26-20 to the Raiders on Sunday to kickstart the preseason. Lowe has shown enough that he should make the team’s opening-day roster and dress each week as a rookie, whether he earns a starting node or not.

Profiles: 6-3, 290-pound defensive lineman in his first year in the NFL with the Saints

Before the NFL: Black, the former Harlem star, played at Syracuse from 2017-2021, and was a starter almost immediately.

Start of career: He signed on with the Saints after he wasn’t drafted this past summer.

So far this year: Black is listed as the Saints third-string left defensive end, and the fourth-string left defensive tackle. He has shown a lot of versatility early on, and the Saints like that. He could latch on and make the roster as a rookie as well, though it will be tougher for him to get a lot of playing time (unless the team deals with an injury or two on the line).

Jay Taft is a Rockford Register Star sports reporter. Email him at [email protected] and follow him on Twitter at @JayTaft. Sign up for the Rockford High School newsletter at rrstar.com. Jay has covered a wide variety of sports, from the Chicago Bears to youth sports, for more than 20 years at the Register Star, and for nearly 30 years all together. He was a four-sport athlete himself, and is the father of five that went on to be jocks of some kind as well.