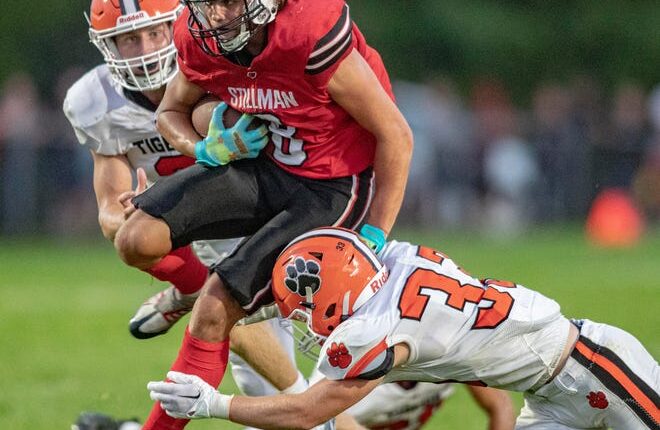 STILLMAN VALLEY — Byron vs. Stillman Valley has been the Big Northern’s premier football rivalry for decades. Stillman has won five state titles under coach Mike Lalor. Byron has won five of the last six BNC titles and has played in the last three Class 3A state title games.

The two schools, located less than 6 miles apart, both won their first state titles in the same year. That season began with one of the area’s all-time classic games. But Friday’s season opener may have been even more unbelievable. Here are five reasons why Stillman Valley’s 15-7 overtime victory over Byron’s reigning 3A state champs Friday is an instant classic.

“The first day of practice, my house got hit by lightning and caught fire,” Lalor said. “We have been living on a neighbor’s couches for several weeks. The whole community has gone out of its way to give us a home, but it’s been very difficult.”

Week 1:Scores from around the Rockford area

The fire was put out with damage mostly to the garage and attic, but Lalor was hurting even before that. He coached Friday with a boot on his leg.

“I fell through the deck and broke the leg in a couple of different places about two weeks before that,” Lalor said. “So it’s been five weeks of fun.”

Friday’s win was Lalor’s 200th career victory. When the announcement was made, he turned toward the press box and pumped his right fist in the air three times. Then, with tears in his eyes, he began hugging his players.

“In the regular season, this win is up with the best we’ve ever had,” Lalor said. “The last couple of weeks haven’t been very good. To have something like this happen takes away a little bit. It’s a wonderful feeling.”

“His 200th win couldn’t be any better,” said linebacker Aiden Livingston, who clinched the win with an interception on fourth-and-8 in overtime. “We knew he was at 199, but we tried to play like it was his first one. We wanted to give it to him. We knew he has gone through so much this last month.”

Sean Considine, who won a Super Bowl ring with the Baltimore Ravens, is the biggest star in the history of this rivalry. He had 287 yards combined rushing and receiving on only 15 touches when Byron beat Stillman 44-42 in the 1999 season opener when both teams went undefeated the rest of the way. And Friday his oldest son made his first mark for Byron. Caden Considine, a 5-11, 200-pound freshman who wears his dad’s old No. 37, scored the tying touchdown on a 3-yard run midway through the fourth quarter. He finished with 23 yards on six carries and also played some linebacker on defense.

“He’s a great player,” Byron quarterback Braden Smith said. “He’s a freshman. He’s new to it, but he ain’t new to nothin’ ”

All the stories in one place:Ultimate guide to Rockford-area high school football for 2022

Byron had won seven of the last eight meetings. Stillman squeaked out an 18-16 win in 2019, but Byron had won six of the other meetings by at least two touchdowns, including 35-0 in last year’s opener.

“We got handled so bad last year,” Lalor said. “We hoped we could just come in and play competitively.”

The Cardinals did more than that. They beat the No. 1-ranked team in Class 3A.

“This rivalry means everything,” said Porter Needs, who scored the winning touchdown on a third-down, 3-yard run in overtime. “I’ve been playing football for the last five years of my life. This is my sixth. And I’ve never beaten Byron. To end it on my senior year, home field, playing the state champs: it’s amazing.”

The Cardinals played great defense, holding Byron 152 total yards on 47 plays. Byron gained only three first downs the entire first half, and two of those came on fourth down.

“Their defense is really good,” Byron QB Smith said. “They played well all game. We played well on defense all game, too.”

Byron held Stillman to 221 yards — all on the ground — on 49 plays. But when Stillman did move the ball, the Cardinals did it in true Stillman Valley style. They took a 7-0 halftime lead by marching 75 yards on 14 plays after recovering a fumble, not only taking the lead but leaving Byron with little time to answer before the half. Jory Spain (58 yards on 19 carries) scored on a 5-yard run one play after a 22-yard gain by Needs.

“That is Stillman football,” Needs said. “That is teamwork and toughness, giving 100 percent effort and second effort. That’s Stillman.”

Stillman did the same thing on his winning touchdown, with Needs bouncing off a tackler at the 2 to force his way into the end zone on third down in overtime. Spain then plowed up the middle for a two-point conversion.

“He gave tremendous second effort,” Lalor said of Needs, who finished with a game-high 74 yards on only seven carries.

“Their ‘backer hit me pretty hard,” said Needs, who ran for 56 yards on eight carries, “but I saw where the touchdown was and just reached over and got it in there.”

Stillman’s bleachers were full. So were Byron’s on the other side of the field. Fans lined the fence surrounding the field. And filled the hillside between the fence and the concessions stand.

“There’s not a better feeling,” said Stillman quarterback Braden Engel, who ran for 64 yards on eight carries. “It feels amazing to go out there and work our butts off and see it pay off.

“This means everything to me. My dad is the athletic trainer here. He has worked here as long as I’ve been born. I’ve been raised with this rivalry. It’s in my blood. This is such a big game, and to pull it out that way is amazing.”